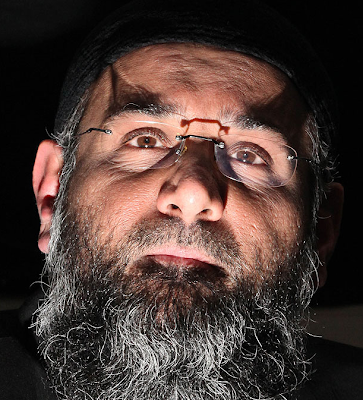 
Mötet i Helsingfors
**
Svenska YLE skriver:
"Anjem Choudary led the Islamist group Islam4UK
in Britain before it was proscribed under the UK's
counter terrorism laws in 2010.
Choudary was in Helsinki last Thursday to speak at
a secretive gathering held to mark the tenth anni-
versary of the jailing in Norway of Kurdish radical
Islamist leader Mullah Krekar.
Last week, the Finnish Security Intelligence Service
(Supo) confirmed to Yle that it was aware of the
gathering. A Supo representative also told Yle at
that time that it has long been known that there
are increasing numbers of individuals in Finland
with links to radicals.
According to the British newspaper The Sun,
Choudary spoke to 60 Kurdish immigrants,
telling them to “rise up” and predicted the Islamic
flag would one day fly over the Finnish parliament
building.
He told his listeners to be proud of being
considered terrorists.
Choudary also said that being called radicals
means that they do not compromise."