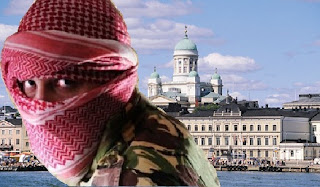 Den somaliska terroristhärvan i Finland
växer hela tiden. Enligt Vlad Tepes
är just nu sju islamister gripna eller
efterlysta. Alla inblandade i Al Shabaabs
terrorplaner.
**
"HS: Finland’s first counter-terrorism investigations
have been made yet another arrest.
Police have arrested one person in the morning
the metropolitan area, who is a Finnish national
and an ethnic Somali.
In addition, the Central Criminal Police and Security
Police have made home searches and seizures related
to the case.
There are now six people people suspected of a crime,
one of whom is in custody. Police estimate that the
pre-trial of the case will last for months yet.
UPDATE: YLE, the Finnish state broadcaster is stating
that :
Related to the same case, is the continued imprisonment
of one person. He has been imprisoned since the early
autumn of 2011. He is also an ethnic Somali. In total
there are six suspects, including two on a travel ban.
[...] Two of the suspected can be reached abroad,
and one can not be found.
NOTE: This is an example of the mainstream
media not being able to report a story correctly.
The say in both article that 6 people in all, are
suspected of involvement, though they speak
of seven individuals.
- 2 are in fact in custody
- 2 are on a travel ban
- 2 are abroad and 1 can not be reached.
That adds up to seven in my thinking."
***
Se även Avpixlat
Upplagd av hcp kl. 18:00