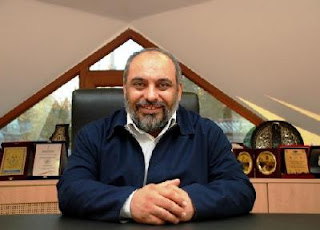 a key role in the last Flotilla to , gave an

which is closely associated to the Turkish authorities.

The interview focused on the events that surrounded

the 'Marmara' boat and the developments that

The interview had two parts:

referred at length to the proposal of the

American Congress to announce that the

IHH is a terrorist organization.

He again and again used an anti Semitic

motive, claiming that the 'Zionists' (the

term that is now used instead of 'Jews')

control the United States, including

the president, the Congress, the govern-

ment and the media. He also claimed that

and media industries all over the world.

In the second part of the interview,

Yildirim referred to the 'Marmara'

He repeatedly accused of intentionally

according to him, didn't carry any weapons.

He also defended the aid given by the IHH to

the Hamas in the Gaza Strip, and he threatened

that IHH will not leave alone until it

removes its blockade of the Gaza Strip.

Yildirim brought up the false claim that

had carried out the 'massacre' on the 'Marmara'

in order to signal to that it is the real owner

of the Mediterranean oil and gas capital (according

to Yildirim, the location of the 'Marmara' attack is

the exact place in which wants to produce

underwater gas). He also came up with a grotesque

argument that planned to attack and

and carry out a massacre there, and only

the humanitarian aid organizations who organized

the flotilla took measures to prevent that.