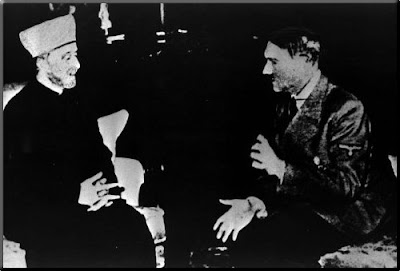 Sheikh Yusuf al-Qaradawi is an Islamofascist.
He is also an enemy of the West. Such statements
are not idle jibes. Qaradawi is the "spiritual leader"
of the Muslim Brotherhood, an organization whose
previous luminaries included Amin al-Husseini
(1895 - 1974), the Mufti of Jerusalem.
Husseini organized fatal attacks upon Jews while
Mufti, during the time of Britain's Palestinian
Mandate. Husseini went to Nazi Germany where
he met Hitler and became involved with Adolph
Eichmann. Husseini was employed to recruit
Muslims to join the 13th division of Himmler's
Waffen SS. He also encouraged Eichmann to ignore
a "prisoner exchange" of Polish prisoners and Jewish
children. As a result, thousands of Jewish children
were sent to their deaths at Theresienstadt
concentration camp.
**
The Muslim Brotherhood itself, despite all attempts
by leftists and liberals to portray it otherwise, is a
fascist organization. It has aims to place the whole
world under Islamic control. Anyone who believes
that the Muslim Brotherhood is not a fascist
organization should read Milestones by Sayyid Qutb.
This man, who was the Muslim Brotherhood's spiritual
emir from the early 1950s until his execution in 1965,
also wrote a work in 1950 called "Our struggle with the
Jews" in which his anti-Semitism was revealed.
***
Läs resten av artikeln i
Western Resistance 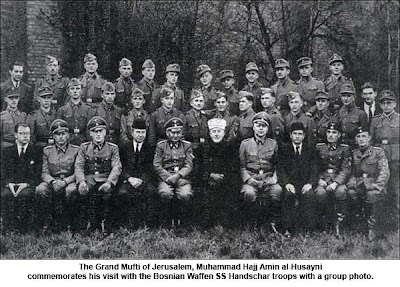