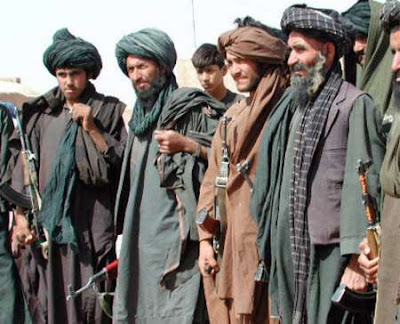 De indiska underrättelsetjänsterna har en
mycket diskret framtoning. Dock anser
"branschfolk" att deras bevakning av
hela regionen är mycket god. De gör
aldrig uttalanden eller syns på konferenser,
istället är det en grupp officiellt pensionerade
äldre ämbetsmän som för deras talan.
Den främste experten på Taliban- och
jihadisthotet är den förre kabinetts-
sekreteraren B. Raman.
**
Hans varningar kan se ut så här:
The "Daily Times" of Lahore, a well-informed
and reliable daily, reported on December 24,
2006, as follows:
"Police are trying to trace a gang of British
Muslims who are thought to have returned
(to the UK) to plot terror attacks in Britain after
being trained abroad for more than a year
by Al Qaeda. Nine Britons, all said to be in
their twenties, were among a group of 12 Western
recruits groomed by Al Qaeda at a secret camp near
the Afghan border to set up new terror cells in
London and other Western Capitals. Police do not
know the real identities of this gang. As well as nine
Britons, they include two Norwegians and an
Australian who were smuggled into the
Waziristan tribal region in Pakistan in October
2005.They are believed to have been under
the command of an Al Qaeda veteran suspected
of training some of the Britons accused of the
alleged plot to blow up passenger planes
flying to the US from Heathrow airport
in the summer."
***
"Source reports from North Waziristan and
Afghanistan say that individual elements from
the Pakistani diaspora in the UK and the
Scandinavian countries are being given training
only in the camps of the Pakistani jihadi organisations
such as the Lashkar-e-Toiba (LET), the Jaish-e-Mohammad
(JEM), the Harkat-ul-Mujahideen (HUM), the Harkat-ul-Jihad-
al-Islami (HUJI), the Lashkar-e-Jhangvi (LEJ) and
the Jundullah and not in the camps of Al Qaeda or
the Taliban.Al Qaeda is still afraid that if it opens
up its training camps to non-Arabs, its internal
security might be diluted, enabling the
British intelligence to penetrate it."
***
" Reliable sources say that, firstly, Al Qaeda
is keen for another spectacular terrorist strike
in Western Europe or North America in order
to demonstrate once again its reach; and secondly,
since Arabs will have difficulty in carrying this out
due to tightened police and security checks on
Arabs, it has been encouraging the Pakistani
jihadi organisations to take over this responsibility
under its guidance. In this connection, two new
developments have come to notice. First, the LEJ,
which is the most motivated and ferocious of
the Pakistani jihadi organisations, has reportedly
set up a clandestine presence in the UK and second,
self-motivated individual Muslim women from
the UK, the US and Canada have been coming
to Pakistan to study in the madrasas exclusively
for women set up by these pro-Al Qaeda jihadi
organisations. An act of suicide terrorism by
a woman jihadi in the UK or the US
or Canada is a growing possibility."
****
South Asia Analysis Group
Upplagd av hcp kl. 05:00