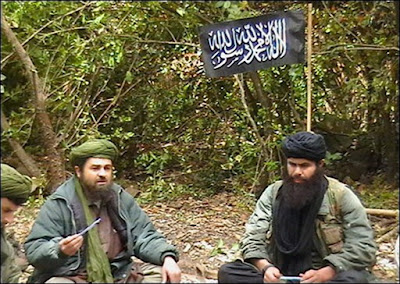 On March 11, 2004, Spain experienced the largest terrorist
attack against a Western country since the attacks on
America of Sept. 11, 2001. More than 200 people were
killed, and 1,500 injured when 10 bombs ripped through
metro trains during the height of Madrid’s rush hour.
The Spanish government immediately blamed the separatist
group Basque Fatherland and Liberty (ETA); however,
subsequent investigations have led to the belief that the
bombings were carried out not by ETA but by the
Moroccan Combatant Group (GICM from its French
acronym) – the terrorist organization believed to be b
ehind attacks in Morocco a year earlier.
**
In May 16, 2003, five simultaneous bombs hit Casablanca,
killing 45, including 12 bombers. The GICM was blamed
for the attacks. Yet this group is still very much a mystery
to both the public and investigators. There is no definitive
answer about who the group’s leader is, and a string of
arrests spanning Europe has led more to conjecture that
this GICM may be a pseudonym for a larger web of
terrorists with links to al Qaeda and the international
jihadist movement.
**
The United States Department of State “Patterns of
Global Terror” report states that GICM emerged in
the late 1990s, however it is speculated that its founding
dates back to the early 1990s, when it was formed by
veteran mujahadeen of the war against the Soviet
occupation of Afghanistan. Morocco first experienced
Islamic radicalism in 1969 with the birth of the Shabiba
Islamiya. This organization split into two factions, and
one of the groups that emerged came to be known
as the Moroccan Combatant Group (GICM).
They are believed to operate in the UK, Denmark,
Belgium, Egypt, Turkey, Morocco, Spain and France,
and to deal in the trafficking of falsified documents
and arms smuggling. The U.S. State Department
lists the organization’s goals as: the creation of an
Islamic State, followed by supporting al Qaeda’s
war against the West. Consequently, the U.S. has frozen
the organizations assets under EO 13224.
**
The GICM gained public notoriety in 2003 with the
bombing of Casablanca. Soon after the attack and a
number of arrests, four accused were given the
death sentence, and 39 others long-term sentences.
Mohamed Fizazi, who was given 30 years in prison,
is believed linked to both the Madrid bombing, and
al Qaeda. Fizazi preached at the same al-Qods mosque
that the Sept. 11 hijackers’ leader Mohamed Atta attended
while studying in Germany. He was preaching in
Tangiers until his arrest in-conjunction to the Casablanca
bombing. It was here where he caught the ear of
Jamal Zougam, who is now a prime suspect in the
Madrid case. As the unfolding Madrid bombing
investigation shows, Fizazi’s ties (and those of others)
to al Qaeda indicate that GICM is part of a larger,
overlapping Islamic movement.
**
Madrid may appear an unorthodox location to bomb
if one’s ambitions are a Moroccan Islamic State.
Yet, GICM is now believed to be behind the attacks
that occurred in the Spanish capital on March 11,
2003. Zougam was arrested almost immediately
after the bombing when police recovered part of a
cell-phone’s SIM card which they were able to
trace to the phone shop he owned. His arrest is
adding to investigators' understanding of the extent
to which GICM has infiltrated Europe and the group’s
connections to al Qaeda. Zougam had lived in Spain
since he was 10 years old, and later traveled outside
the country – apparently on business related to his
phone shop. These trips would often take him to
Tangiers where investigators suspect the roots
of the Madrid attack lie. Here Zougam was believed
to have come into contact with Imad Eddin Barakat
Yarkas (known as Abu Dahdah) – arrested in Spain
in connection with the September 11 bombing.
**
Zougman also is reported to have met with Abdelaziz
Benyaich in April 2003. Although not believed to be
associated with the Madrid bombings, Benyaich had
been working with Islamic militants in northern
Morocco, and was arrested in Spain soon after the
Casablanca attacks. An investigation found that Benyaich
had been involved in testing cell phone devices that
could set off bombs similar to the ones used in Madrid.
He has also been linked with Abu Musab Zarqawi –
a suspected leader of the Iraqi insurgency who is also
believed to have carried out the on-camera beheading
of American Nick Berg – Zougram and Benyaich.
**
Ongoing investigations continue to shed light on the
structure of GICM. Spainish authorities arrested 16 suspects,
11 of them Moroccan, in connection with the March 13
bombing. Then on April 3, 2004, suspected terrorists
blew themselves up after being cornered by police
in a flat in the Madrid suburb of Leganes. Among the
remains later identified were those of the alleged
leader of the March 11 attacks – Serhane Abdelmajid
Fakhet, a Tunisian. Just two days after Fakhet and
others blew themselves up; French authorities detained
13 suspected militants in a dawn raid stemming from
the attack in Casablanca one year earlier.
**
Until recently, Mohamed Guerbouzi was thought by
Moroccan authorities to be the head of the GICM
– but this point is still debatable. Currently, Guerbouzi
lives in England, but is being extradited by Morocco
to serve twenty years in prison. Confessions from
Noureddine Nfia, who was convicted and sentenced
to 20 years for his role in the Casablanca attack,
reportedly implicate Taeb Bentizi as the GICM’s leader.
Mohamed Guerbouzi is alleged to be his deputy.
A report compiled from Nfia’s confession also claims
that GICM has sleeper cells in Britain, Belgium, France,
Italy and Canada.
****
(CDI)
Upplagd av hcp kl. 12:50