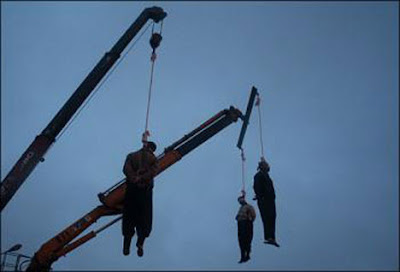 Iran Human Rights, January 29:
According to reliable sources, more than 20 prisoners
have been transferred from the Rajaee-Shahr (Gohardasht)
prison to Tehran’s Evin prison for execution tomorrow
morning. This is a normal routine in Tehran, that those
who are scheduled to be executed, are transferred to
the Evin prison the day before.
***
The same happened when Rahele Zamani,
the mother of two young children
was executed on January 2.
We still don’t have the final list of those scheduled to
be executed. Human rights activists are worried that
several minor offenders could be among those to be
executed tomorrow. The death sentences of several
minors has been approved by the Supreme Court,
and transferred to the section for the implementation
of the verdict (Ejraye Ahkam) in the past weeks.
Upplagd av hcp kl. 05:27