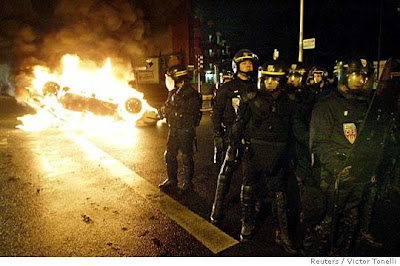 International Herald Tribune (Paris) rapporterar:
"Two years after an orgy of violence in which rioters
in more than 300 suburbs and towns torched cars,
trashed businesses and ambushed the riot police and
firefighters, Villiers-le-Bel and several nearby suburbs
of Paris similarly have erupted in violence and destruction.
In one sense, the unrest seems to be more menacing than
during the early days of the three weeks of rioting in 2005.
Then, the youth seemed disorganized, their destruction
largely caused by rock-throwing and arson and aimed at
the closest and easiest targets, like cars.
This time, hunting shotguns, as well as gasoline
bombs and rocks, have been turned on the police.
"From what our colleagues on the scene tell us, this is a
situation that is a lot worse than what we saw in 2005,"
Patrice Ribeiro, a police officer and senior union official,
told RTL radio Tuesday.
He added,
"A line was crossed last night, that is to
say, they used weapons and fired on the police.
This is a real guerrilla war."
Ribeiro warned that the police, who have struggled to avoid
excessive force, would not be fired upon indefinitely without
responding.
More than 80 police officers already have been wounded in
the clashes, several of them seriously, Ribeiro said later
by telephone.
Thirty of them were hit with pellets from shotguns,
and one of the wounded was hit with a type of bullet
used to kill large game, he added.
It is legal to own a shotgun in France - as long as the owner
has a license - and police circles were swirling with rumors
that the bands of youth were procuring more shotguns."
Upplagd av hcp kl. 00:38