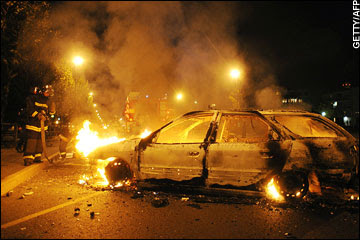 In France outside of Paris, a crowd of youths threw stones
and Molotov cocktails at police and set police barricades on
fire Nov. 26. They also set fire to 36 vehicles, the Villiers-
le-Bel prefecture said. Police responded with tear gas and
rubber bullets, and 38 officers were wounded, three
seriously. One reporter also was injured.
Riot grips Paris suburb after youths
killed in police crash
***
The "Paris Riots" Are
Actually the "French Intifada"
***
Likheterna med 1968 är stora.
Och varför....?
"In France, radical Islam is replacing the traditional
Left as the voice of the disaffected Muslim underclass.
Propelled by frustration over unemployment, uneven
distribution of wealth and social disadvantage, some
young Arabs and Africans have turned to Islam with
the same fervour that the idealistic youth of the 1960s
turned towards Marxism. Islam’s growth as a vibrant
ideology of the downtrodden mirrors the wave of religious
fervour that has swept Arab North Africa in the past
twenty years. It offers its devotees a transnational
ideology and utopian vision. The goal is a vast, if not global,
caliphate governed according to sharia, the legal code
based on the Koran. It constitutes what Olivier Roy
refers to as a ‘globalised’ Islam, distinguished by a decoupling
of ideas and ideology from any geographical context.
It is this most extremist recension, both as ‘part of and
heir to the modern Third Worldist anti-US movement’
and containing definable elements of Western antisemitism,
that inevitably, according to Roy, ‘attracts the more
radical elements among uprooted Muslims who are i
n search of an internationalist, anti-imperialist structure
but cannot find any leftist radical organisations, or
are disappointed by existing ones’.
France is not an isolated case.
It can be argued that all Europe
is increasingly becoming the
front line for Islamists
who have chosen a more
radical political approach
***
Läs mer
Upplagd av hcp kl. 12:15