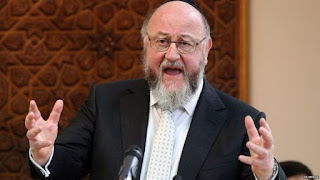 The chief rabbi has strongly criticised Labour, claiming the party is not doing enough to root out anti-Jewish racism - and asked people to "vote with their conscience" in the general election.
In the Times, Ephraim Mirvis said "a new poison - sanctioned from the very top - has taken root" in the party.
Labour's claim it had investigated all cases of anti-Semitism in its ranks was a "mendacious fiction", he added.

A number of prominent Jewish Labour politicians, including Luciana Berger and Louise Ellman, have quit the party after being the subject of anti-Semitic abuse on social media while others have accused Mr Corbyn of personally endorsing anti-Semitic tropes and imagery.

In his article, the Orthodox chief rabbi of Great Britain and Northern Ireland - who is the spiritual leader of the United Synagogue, the largest umbrella group of Jewish communities in the country - says raising his concerns "ranks among the most painful moments I have experienced since taking office".

But he claims "the overwhelming majority of British Jews are gripped by anxiety" at the prospect of a Labour victory in 12 December's general election.


He writes: "The way in which the leadership of the Labour Party has dealt with anti-Jewish racism is incompatible with the British values of which we are so proud - of dignity and respect for all people.
"It has left many decent Labour members and parliamentarians, both Jewish and non-Jewish, ashamed of what has transpired."

He adds that it was "not my place to tell any person how they should vote" but he urged the public to "vote with their conscience".

The chief rabbi claimed the response of Labour's leadership to threats against parliamentarians, members and staff has been "utterly inadequate" and said it "can no longer claim to be the party of equality and anti-racism".

Mike Katz, the chair of the Jewish Labour Movement group which is officially affiliated to the party, said the chief rabbi was "absolutely right" and there had been a failure of leadership over anti-Semitism in Labour.

The Archbishop of Canterbury, Justin Welby, said the chief rabbi's "unprecedented" intervention "ought to alert us to the deep sense of insecurity and fear felt by many British Jews".

In a statement, he said everyone should be able to "live in accordance with their beliefs and freely express their culture and faith".

This is a sweeping and unequivocal condemnation of Labour's leadership, its treatment of Jewish parliamentarians and its handling of allegations of anti-Semitism.

It's also highly unusual for such an intervention by the leader of a religious denomination during a general election campaign. The chief rabbi has pastoral oversight for a large proportion of people who identify as Jewish in the United Kingdom.

Last week, the Archbishops of Canterbury and York appealed to voters and politicians to "honour the truth" and "challenge falsehoods" but there was no specific criticism of individual candidates nor their party leaders.

But the chief rabbi's article asks if Jeremy Corbyn is fit for high office and calls on voters to consider what the result of this election "will say about the moral compass of this country?"

Last year, three Jewish newspapers, - The Jewish Chronicle, The Jewish News and The Jewish Telegraph - published exactly the same front cover on 25 July - arguing that a Labour government under the leadership of Jeremy Corbyn would prove "an existential threat" to British Jewry.

The chief rabbi, in this highly critical column, is saying much the same.