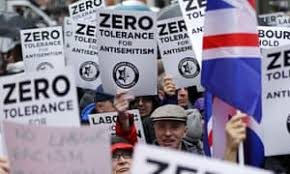 
(Jerusalem Post) A number of prominent British figures have declared that they will not vote for Labour in the upcoming general election due to the party's links with antisemitism.

John Le Carré and Joanna Lumley were among those who, in an open letter to The Guardian, pledged to put Jewish concerns above wider issues such as Brexit.
"We listen to our Jewish friends and see how their pain has been relegated as an issue, pushed aside by arguments about Britain’s European future. For those who insist that Labour is the only alternative to Boris Johnson’s hard Brexit, now, it seems, is not the time for Jewish anxiety," the signatories wrote.

Highlighting the formal investigation by the Equality and Human Rights Commission into institutional antisemitism within the Labour Party, and the departure of two Jewish MPs from the party, the signatories said that Labour leader Jeremy Corbyn "has a long record of embracing antisemites as comrades."
The upcoming general election is widely viewed in Britain as a further referendum on Brexit, with all parties making their particular stance on Britain's exit from the European Union central to their message to voters.

But the signatories argued that concerns over antisemitism go deeper, right to the heart of the British character, turning this election into a pivotal point in British history as the nation decides what sort of country Britain is to be in the post-Brexit era.
"Antisemitism is central to a wider debate about the kind of country we want to be," they wrote. "To ignore it because Brexit looms larger is to declare that anti-Jewish prejudice is a price worth paying for a Labour government. Which other community’s concerns are disposable in this way? Who would be next?

"Opposition to racism cannot include surrender in the fight against antisemitism. Yet that is what it would mean to back Labour and endorse Mr. Corbyn for Downing Street. The path to a more tolerant society must encompass Britain’s Jews with unwavering solidarity."
The 24 signatories include authors John Le Carré, whose real name is David Cornwell, and William Boyd, both of whom have previously expressed anti-Brexit opinions. Labour is pledging a second referendum on Brexit as opinion on the matter continues to be split within the country.

Former Labour politician and ex-chair of the Equality and Human Rights Commission (EHRC) Trevor Phillips was also among the group, who said they would not vote for Labour, as were historians Antony Beevor, Tom Holland and Dan Snow, and respected actor Simon Callow.
"We endorse no party. However, we cannot in all conscience urge others to support a political party we ourselves will not. We refuse to vote Labour on 12 December," they wrote.
Seven Labour MPs quit the party earlier this year in protest at the ongoing allegations of antisemitism. Among them was Jewish MP Luciana Berger, who has called for the results on the investigation into institutional antisemitism in Labour to be released before the election.
Upplagd av hcp kl. 05:38