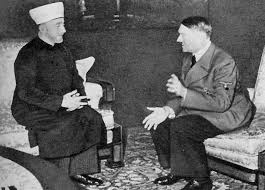 Nej, det är ingen nyhet, men tål att upprepas ofta...
På Gatestone skriver Samuel Westrop om den "murky
antisemitic subculture" som växt fram i Storbritannien:
Recent anti-Israel protests have been attended by thousands across Europe. These protests come in opposition to attempts by Israeli forces to quell the rocket fire aimed at Israeli citizens by the Palestinian terror groups Hamas and Palestinian Islamic Jihad.
**
In Britain, the protests in support of Hamas have been chiefly organized by a mixture of Sunni Islamist groups and groups aligned with the Socialist Workers Party. The attending protestors, though, seem to come from across the political and religious spectrums.
European hatred for the small Jewish state, or Jews in general, apparently continues to transcend all ideological differences to the point where pro-Assad activists can march alongside Sunni Islamists, while neo-Nazis stand shoulder to shoulder with Marxists.
**
Parliamentarians such as Andy Slaughter MP and George Galloway MP walked next to Islamist activists such as Ismail Patel, a supporter of the late French Holocaust Denier Roger Garaudy. Patel advocates the killing of adulterous women and has previously stated: "Hamas is no terrorist organization…we salute Hamas for standing up to Israel." Marching between Andy Slaughter and Ismail Patel was Hafiz al-Karmi, an official from the Palestinian Forum of Britain, one of the UK's leading pro-Hamas organizations.
**

﻿
Activists from the Palestine Solidarity Campaign, closely aligned with Britain's Socialist Workers Party, seemed happy to march alongside James Thring and Lady Renouf, two neo-Nazi activists. Thring, described as "an anti-Zionist activist who has been vocally supported by former the Ku Klux Klan Grand Wizard David Duke," has been featured in revisionist pro-Nazi documentaries and is aligned with the "New Right" society, a British neo-Nazi organization. 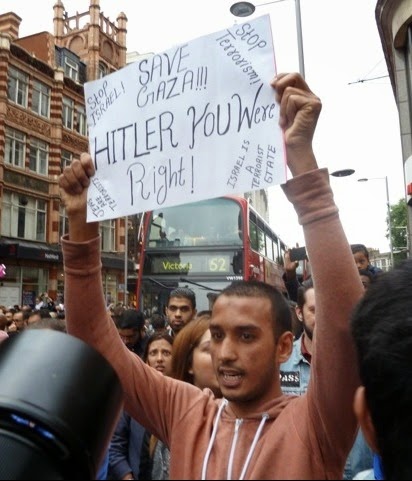 Lady Renouf claims that Judaism is a "repugnant and hateful religion," and is described by Searchlight Magazine as "the chief cheerleader for disgraced Holocaust denier David Irving. Renouf has contributed to the defense of several other Holocaust deniers and has since become one of the most influential figures in this murky anti-Semitic subculture."
**
Activists from the Neturei Karta, an extreme anti-Zionist sect, have also been a recurring presence at recent anti-Israel protests. Neturei Karta recently protested in support of the Hungary's "neo-Nazi" Jobbik party, the officials of which have "rejoiced" at the deaths of Israeli soldiers killed by Hamas terrorists in Gaza. In 2006, Neturei Karta's UK branch leader, Ahron Cohen, stated that those Jews who perished in the Holocaust "deserved it."
**
Other protestors have included activists from the Islamic Human Rights Commission, an Iranian-aligned Islamist group. Despite the Sunni-Shia fighting in Syria and Iraq, supporters of the pro-Assad terror group, Hezbollah, appeared to have no qualms about marching against Israel alongside supporters of Sunni jihadists waving the Black Standard, the preferred flag of Sunni Islamist terrorist organizations.