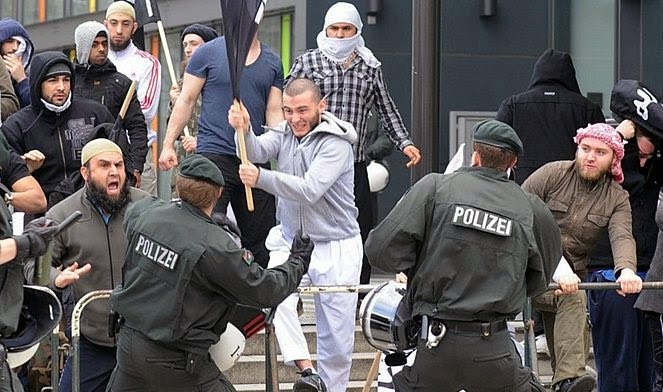 Vissa hävdar att det är en "tokig konspirationsteori"
att påstå att den politiska eliten i Europa
aktivt understödjer islamiseringen av Väster-
landet. Det är inte ens en teori, utan en helt
korrekt observation, skriver Fjordman i sin
senaste artikel.
Den publiceras i bl a Gates of Vienna.
Läs den !
***
Why is This Not Betrayal?
by Fjordman
It is dismissed as a “crazy conspiracy theory” if one suggests that Western political elites actively support the Islamization of Europe and the Western world. Yet one might argue that this is not a conspiracy theory — or even a theory — merely an observation.
The more Muslims and people who champion Islamic ideas imported into a society, the more Islamic influence there will be in that society. This is basic logic: if you import large numbers of Muslims to a country, you get more Islamization. It’s pretty simple, really.
So let us ask a simple question: Do Western governments allow large numbers of Muslims to settle in Western countries? Yes or no? The answer is obviously yes, as we can easily observe all around us. Western authorities have for decades been in the process of importing large numbers of Muslims to our countries. Since more Muslims means more Islam, this implies that Western authorities actively support the gradual Islamization of our countries.
If you find this to be a provocative observation, then ask yourself the following question: If Western political elites, ruling authorities and mass media really and truly object to the growing Islamic presence in our societies, then exactly what are they doing to curb this growth, apart from some mostly symbolic gestures?
As long as they are not doing anything substantial to halt or even slow down Muslim immigration, they are in fact supporting the continued, gradual Islamization of our countries. There is no other way to put it.

What can be done?
A hard-line option might be to say explicitly that Islamic culture is incompatible with our culture. Therefore, Muslim immigration to all European and Western nations will be immediately and permanently halted. This will probably be seen as too provocative by many people, however.

A more plausible alternative might be to say that while many Muslims might be fine people as individuals, much of the Islamic world is currently in such a state of unrest and turmoil that we need to protect our own societies as much as we can from this. We are therefore sad to announce that we must, for an indefinite time period, suspend any immigration from this part of the world.
An even more moderate solution might be not to say anything about Muslims or Islam at all. Western governments could simply state that our share of the world’s population keeps dropping rapidly. Moreover, we have plenty of problems of our own to deal with. The unemployment rate in several southern European countries is above 20%, with youth unemployment exceeding 40% in some places. It does not make sense in this situation to import millions of more people when we cannot provide work to those who are already here.
With social problems and debt to take care of, we need to put our own house in order first. While we harbor no ill will towards other peoples and nations, we therefore regret to announce that we will have to suspend large-scale immigration from any part of the world until we have put our own house back in order again.

It is possible to understand why, for pragmatic reasons, Western authorities do not choose the confrontational approach and state openly that Islamic culture is incompatible with our culture. However, it is much more difficult to understand and accept why Western governments cannot choose one of the two other options.
They can simply state that due to the turmoil that exists in many parts of the Middle East and the Islamic world, we need to take steps to protect our borders more firmly. If we need to withdraw from certain naïve human rights conventions in order to reestablish effective control over our national borders, then we must do so.

Furthermore, the percentage that Western societies constitute of the global population and the global economy keeps shrinking fast. We are not all-powerful. Moreover, we have distinct national cultures that we would like to preserve, too. Our countries are the homelands of distinct peoples with a shared history, not empty bowls only to be filled by shopping and human rights.