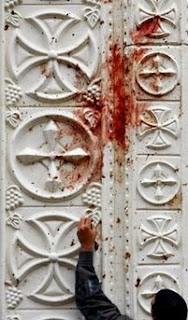 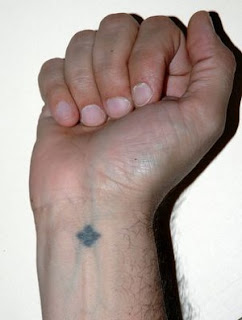 **
In December, 2010 Abdel-Zaher, who worked as a police-
man at the Bani Mazar police investigations unit, went on
a train bound for Cairo from Assiut in the upper Egyptian t
own of Samalut and fired his gun at six Copts after
chanting "Allahu Akbar" (AINA 1-12-2011).
According to eye-witnesses, he walked up and down the
train car, looking for passengers with the sign of the cross
tattooed on their wrist, which the majority of Copts have,
or any other sign revealing their Christian identity.
He aimed at six Copts sitting together, dressed in western-
style clothes and singing Christian hymns. He opened fire
on them, killing a 71-year-old Fathy Ghattas, who died
immediately as he slept. Another five Copts were seriously
injured .
(....)
The Egyptian interior Ministry issued several statements
to cover-up the sectarian motives behind the incident and
said the assailant shot indiscriminately at passengers and
was "mentally unstable" and had previously undergone
medical treatment.
Today's verdict came as a surprise to the Egyptian
Christians, as "usually killers of Christians, literally
get away with murder," commented Coptic activist
Mark Ebeid.
Coptic activist Mina Yacoub, of the Maspero Coptic
Youth Federation, was less optimistic. He said the
ruling is because of this week's Egyptian presidential
elections, where Islamists are hoping to get some
of the Coptic votes and are trying to prove to them
that "Islam is a 'just religion' and they have nothing
to worry about with the application of Sharia, which
they are advocating.
Why has the death penalty never been passed on a
Muslim for killing a Christian, it is because Islam plainly
says in Hadith 9:50, 57 'No umma [a member of Muslim
community] should be killed for killing a Kafir [infidel]'
and this has been applied diligently by judges."
Referring to the death penalty passed in January 2011 on
Muslim Hammam el-Kamouni, who shot dead six Copts as
they left church on Coptic Christmas Eve on January 6,
2010 in Nag Hammadi, he explained that with the six
murdered Copts was a Muslim policeman who died by
mistake and this death penalty was in lieu of his blood
(AINA 1-7-2010).
Upplagd av hcp kl. 00:00