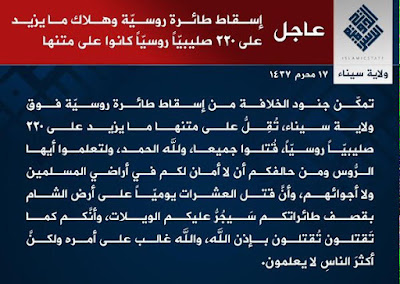 "The fighters of the Islamic State were able to down a Russian plane over Sinai province that was carrying over 220 Russian crusaders. They were all killed, thanks be to God," said a statement from the Sinai affiliate of ISIS after a Metrojet Airbus 321, carrying 217 Russian tourists and 7 crew from Sharm el-Sheikh to St. Petersburg, crashed in central Sinai early Saturday morning, Oct. 31. There were no survivors. President Vladimir Putin declared Sunday a national day of mourning after sending messages of sympathy to their families.

The terrorists’ statement went on to say: “You should know, Russians and your allies, that you have no security on Muslim land or its airspace… The daily murder of scores of innocents in Syria by your air bombardments will bring upon you disasters…
Just as you kill, so you will be killed…”|
Kalifatet har också publicerat en film av den påstådda
nedskjutningen:

﻿
Vanligtvis välunderrättade DebkaFile med goda underrättelsekällor skriver i natt:
Debkafile early Saturday attributed the disaster to the ISIS Sinai branch Ansar al-Bait Maqdis, while Moscow and Cairo issued confusing claims as to its cause. They included a distress call from the pilot of the Russian plane to the Egyptian control following a technical fault with a request to reroute the plan to El Arish or Cairo.
However, aviation sources say this exchange never took place and the Airbus abruptly disappeared off the screens indicating a sudden catastrophe.
The Egyptian daily Al-Ahram Arabic quoted the head of Egypt’s Air Navigation as admitting later that the plane’s pilot did not request an emergency landing before crashing.

Responsibility for the air disaster claimed by ISIS takes the war on the Islamic terrorists down to a new security low for all the countries in the region, including Israel. Lufthansa and Air France airlines have suspended all flights over the Egyptian Peninsula. President Putin will be under pressure to decide whether or not to expand Russia’s war on the Islamic State in Syria and Iraq or pull back.
debkafile reported earlier Saturday.
A Russian civilian plane with 217 passengers and 7 crew aboard crashed, and is belived shot down by a missile, over Sinai over Sinai early Saturday morning, Oct. 31, shortly after taking off from the Sinai resort town of Sharm el-Sheikh for St. Petersburg.

Initial reporting on the fate of the plane was confused and is still not completely clear. It was first reported to be missing after contact was lost with Egyptian air control; it was then said to be safely on its way to Russia over Turkey. Russian aviation sources then reported the A321 to be missing over Cypriot air space. Finally, the Egyptian prime minister’s office Egyptian prime minister’s office confirmed that a Russian passenger plane had crashed n central Sinai and a cabinet level crisis committee had been formed to deal with the crash.
The airliner owned by the small airline Kogalymavia disappeared from screen 23 minutes after takeoff from Sharm el-Sheikh. There were many families with children aboard.

debkafile reports:  The first claim by Russian aviation sources that the plane had gone missing over Cyprus was an attempt to draw attention from the likelihood that it was shot down over Sinai, where the former Ansar al-Miqdas, which has renamed itself ISIS-Sinai, maintains its main strongholds.
Moscow is reluctant to admit that the Islamic State may have chosen to retaliate for the buildup of Russian forces in Syria and Russia ari strikes on its bases in Syria.
If the airline was indeed shot down by the Sinai branch of the Islamic State, the Russians are finding that ISIS is fully capable of striking at the least expected place and most vulnerable spot of its enemy.
On board the plane were 17 children, along with 200 adults and seven crew, said aviation authorities. There are no signs of survivors.
Confirming the deliberate attempt at confusion, Moscow and Cairo both stated that the plane had disappeared from the radar 23 minutes after takeoff from Sharm El-Sheikh.

This is refuted by the discovery of the wreckage, a few minutes ago, completely gutted and destroyed, and a short distance away near Bir Al-Hassaneh, in the central Sinai Jabal al-Halal mountain range, where Ansar Beit al-Miqdas terrorists are holed up and which is almost inaccessible to rescue teams.
It is to this stronghold that debkafile reported in recent months that ISIS sent officers, former senior members of Saddam Hussein’s army, to set up a major campaign against the Egyptian army, along with advanced anti-air missile systems smuggled into Sinai and the Gaza Strip from Libya for this campaign.
Israel air force jets no longer carry out low flights in the areas within range of the Islamic groups armed with these missiles.

Updating:
In another attempt to disguise the cause of the disaster, Russian and Egyptian officials now say that the pilot of the Russian plane reported a technical fault after takeoff and asked to be rerouted to Cairo or El-Arish. Russian and Egyptian officials have meanwhile announced they are forming commissions of inquiry to investigate the cause of the tragedy. Official condolences were relayed to the waiting families the airport.
The Sinai branch of the Islamic State has developed a highly competent intelligence-gathering network, debkafile’s sources report, operated by local Bedouin tribesmen who track the slightest movements in the Peninsula. The Egyptian army and the American troops serving at the big the Multinational Force base there are fully aware of the round-the-clock surveillance maintained by the terrorists at Egyptian resorts, using staff at hotels, restaurants and the local airfield as inside informers.

Ansar has never yet harmed the tourist traffic in Sinai. But once ISIS decided to use it to hit back at Russia’s intensified military intervention in the Syrian conflict, the Islamists would not have found it hard to find out when the Russian airliner was due to take off from the Red Sea resort, chart its route north along the western coast of the Gulf of Aqaba up to Dahab and then turn west towards central Sinai and head for the Mediterranean. All the terrorists had to do was to lay a missile ambush for the plane from the Jabal Halal eminence of 876 meters (2,865 ft).

Had the crash been the result of a technical fault, as Moscow and Cairo claim, it would not have been so completely gutted but broken up into large fragments. The total destruction could only have been caused b y an explosion either inside the A321 or a direct missile hit.
Upplagd av hcp kl. 02:58