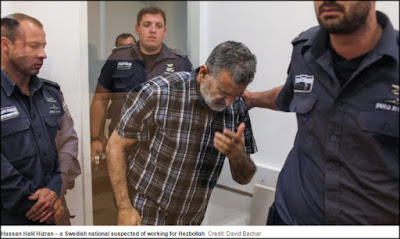 The Shin Bet (Israel Security Agency) said Hassan Hizran, born in 1969 and arrested at Ben-Gurion Airport in July, had admitted to being recruited by Hezbollah, and also provided an account of how he was recruited and cooperated with the Lebanese Shi’ite terrorist organization.

Hizran had arrived in Israel to gather intelligence on sensitive targets for Hezbollah, security officials said.

He received a light sentence for cooperating with the authorities, and due to the state’s concerns about revealing aspects of the country’s intelligence apparatus if the case had gone to trial.

The court said Hizran had not aggressively sought to be a spy, and that he had met his Hezbollah handler under threat.

Hizran also avoided procuring information Hezbollah had asked him for which “reduced the security damage that he caused,” the court wrote in its ruling.

He also had no prior record.

Hizran’s lawyer said his client’s involvement with Hezbollah was “very low and with reservations” about spying and that “he did not yet understand what he had agreed to.”

Officials said that Hizran had traveled to Lebanon with his wife and children in 2009, where he accepted an offer to meet with Hezbollah operatives who told him they wished to recruit Palestinians in Europe who have foreign passports to gather intelligence in Israel for Hezbollah.

Hizran returned to Lebanon in 2011 and 2013, also meeting with Hezbollah and accepting missions to try and recruit Israeli citizens with ties to Jews or Israeli military personnel, or with Israeli government officials.

“Additionally, he was asked to gather information on locations in Israel where there are concentrations of military forces, weapons, tanks and military bases,” the Shin Bet said.

Hizran was ordered to investigate how Israeli security at Ben-Gurion Airport operates, including the reception of passengers, security arrangements and passport control procedures.

“Hizran’s activities prove the attractiveness to Hezbollah of activating foreign citizens who have access to Lebanon and Israel, out of an assumption that they can travel in Israel freely,” the Shin Bet said.

Apparently during questioning, Hizran gave the Shin Bet information about an association in the Swedish city of Malmö called the Lebanese House, whose Shi’ite members carry out social and cultural work within their communities.