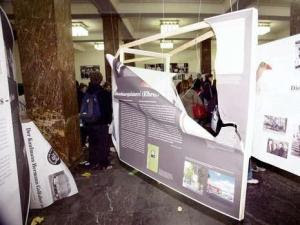 Video från kravallerna på Spiegel Online
**
Jerusalem Post:
Roughly 1,000 pupils and left-wing activists
who unlawfully occupied Humboldt University
(HU) and some of whom destroyed an anti-Nazi
exhibition on Wednesday were reacting to
the university's close ties to Israel,
the university president has said.
**
Christoph Markschies told The Jerusalem
Post that one of the protesters in the lobby
of the university said "Damn Israel" when asked
by another student to "stop" vandalizing the exhibit
"Betrayed and Sold," about the plundering of Jewish
businesses under the Nazis.
**
"Friendship with Israel is part of the HU's
identity," said Markschies, adding that
"no one can tell me that the exhibit was
damaged because it was a mistake."
Markschies had to barricade himself in
his office to escape what he called "the mob."
He said that "HU was directly targeted"
because of its solid partnership with Israel.
**
Markschies charged the pupils and a group
of hardcore leftists known as the "Black Block,"
a group that terms itself anti-fascist, with
disguising their anti-Semitism as anti-Zionism.
***
Kommunisterna (Die Linke) i förbundsdagen
har ställt sig bakom "demonstrationen" och
därmed, får man förmoda, de antisemitiska
kravallerna....
**
BZ Berlin
Upplagd av hcp kl. 11:45