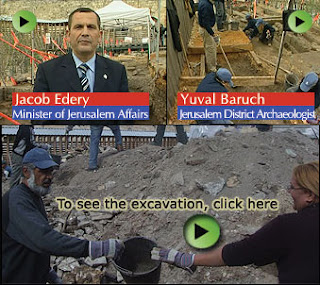 In reaction to salvage excavations near
the Muslim holy sites in Jerusalem,
which started at the beginning of February
2007, Palestinian terror groups have
increased their attacks against Israel.
In addition, terrorist and other radical
groups have staged protests and issued
warnings, some threatening continued
attacks against Israel as well as against
Jewish places of worship abroad.
ADL Terrorism Update March 2007

The attacks and threats coincide with an
incitement campaign led by Palestinian
Authority-appointed officials and leaders of the
Islamic Movement in Israel.
They also coincide with a wave of protests,
which started in Jerusalem and spread
throughout the Muslim world.
According to Israeli security forces,
the campaign to "save Al Aksa"
is directed by Hamas.

The campaign is based on the
allegation that Israeli excavations are
a part of a larger plan to destroy
Al Aksa compound,
which is considered the third holiest
place to Muslims, in order to build
a Jewish temple.
This charge has been used by the
Palestinians as a tactic to mobilize
popular outrage against Israel for decades.
Some observers suggest that the current
assault may be an attempt to focus
the attention of rival militant factions on Israel,
after months of intense
inter-Palestinian fighting.
The campaign, including the allegation that
Israel plans to destroy Al Aksa,
was echoed in the press throughout the
Muslim world and in statements
by high level officials.
Upplagd av hcp kl. 12:26