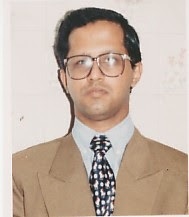 Sallah Uddin Shoaib Choudhury
is the editor of the Weekly Blitz in
Dakha, Bangladesh.
He is facing charges of treason and blasphemy,
and if he’s convicted he faces a life sentence
and possibly the death penalty.
A practicing Muslim , Choudhury
wrote about the rise of Islamist extremists
in Bangladesh and has written articles against
anti-Israeli and Judeophobic attitudes in
Muslim-majority countries.
He also urged Bangladesh-Israel relations
and real interfaith understanding
based on religious equality.
Choudhury has faced continued persecution
since 2003 for writing articles exposing the
rise of Islamist radicals, calling for relations
with Israel, and advocating religious equality.
He has been beaten, tortured and imprisoned
for his efforts, and mobs have been allowed to
attack him and bomb his newspaper with
impunity. Today’s charge specifically mentions
his journalistic activities.
Recently, resolutions condemning Choudhury’s
persecution have been passed in the European
and Australian Parliaments.
A similar resolution in the US Congress recently
passed the powerful House Committee on Foreign
Affairs without opposition and with open support
by the US State Department.
Se http://www.freechoudhury.com/
Upplagd av hcp kl. 15:00