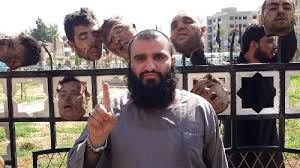 Imam Hajj Saeed of the Al-Faruq Mosque in Copenhagen, the day before the terror attack, rejected any thought of interfaith dialogue, and noted that the Prophet Muhammad waged war against his Jewish neighbors rather than engage in dialogue.


The day after the shootings, the political spokesperson of the main liberal opposition party went on television and said, "We are dealing with a small group that is abusing the Koran." In other words, once again we are faced with one or more Muslims who have completely misunderstood their own religion. The implication, of course is that Danes have nothing to fear from the fast growing number of Muslims or the spread of Islam.

It would appear, however, that the killer, Omar el-Hussein, had not "abused" anything but simply followed Allah and his prophet.
"It is vital that we as Muslims do not distance ourselves [from el-Hussein's actions] but put things in their right context. It is the Danish politicians and media that ought to distance themselves from the politics that have created the circumstances that lead to hatred, threats and violent attacks and eventually murder, regardless of who the victims may be. We must under no circumstances bow to the pressure or accept the premise that Islam is in the dock." — From a press release issued by Junes Kock, spokesman for Hizb ut-Tahrir, Scandinavia.
In all likelihood, the politicians and the media will continue telling the Danes that they have nothing to fear from Islam.

It did not take many hours after last weekend's two fatal terrorist attacks in the Danish capital before the usual phalanx of apologists of Islamism went into action.
Shortly after 3pm on Saturday, when 22-year-old Omar Abdel Hamid el-Hussein had shot and killed one of the guests attending a discussion on free speech at the Krudttønden cultural institute in Copenhagen's Østerbro neighborhood, Prime Minister Helle Thorning-Schmidt arrived at the scene to express her sympathy with the families of the victim and the policemen who had been wounded in the firefight with el-Hussein. She also stressed the need for national unity in this time of horror.

The discussion that came under attack was attended by the Swedish artist Lars Vilks -- famous for his drawing of Muhammad as a roundabout dog, and probably the intended target -- and the French ambassador.
The first question Thorning-Schmidt got from one of the journalists was, "How do you think this is going to affect Muslims in Denmark?" None of the journalists asked, "What are you going to do to protect us from Islamist savagery?" Or, "How can you allow the current mass influx of Muslims when we have so obviously been unable to integrate those already here?"
These questions are now being asked by a growing number of ordinary Danes, for example in social media; but so far no politician of any note has acknowledged any connection between terror, immigration, the build-up of Muslim parallel communities and Islam.

This lapse is despite the fact that el-Hussein had been heard shouting in Arabic as he emptied his automatic weapon into a glass door leading into Krudttønden, after shooting dead 55-year-old film director Finn Nørgaard, who had been standing outside.
El-Hussein managed to flee, and several hours later -- shortly before 1am Sunday -- he turned up outside the synagogue in Krystalgade in Central Copenhagen. In front of the synagogue were the Jewish community's volunteer guard, 37-year-old Dan Uzan, and two policemen who were protecting a bat mitzvah party taking place in a building behind the synagogue. El-Hussein managed to get close to the fence in front of the synagogue by playing drunk, then shot dead Dan Uzan and wounded the two policemen, whose automatic weapons did not function.
By then, the police knew his identity; he was killed some hours later outside a building in the heavily Muslim area of Nørrebro, after opening fire on the police.
Two suspected accomplices, aged 19 and 22, were arrested shortly afterwards and are now in jail awaiting trial.


No mention of Islam

After Omar el-Hussein's two shooting sprees, it should have been perfectly clear to politicians that Denmark was facing religiously motivated terror and that, just as in Paris, it was directed at free speech and the Jewish community.
Nevertheless, none of them -- whether from the government or the opposition -- saw fit to mention Islam as a motivating factor. Rather, everyone went out of his way to stress the need for unity among all religions. The leader of the Jewish Faith Community (Mosaisk Troessamfund), Dan Rosenberg Asmussen, emphasized the need for "Muslims, Christians and Jews" to stand together in this time of adversity.
Rosenberg Asmussen would have been disappointed if he had heard what Imam Hajj Saeed of the Al-Faruq Mosque in Copenhagen told his flock on February 13, the day before the terror attacks: Imam Saeed rejected any thought of interfaith dialogue and noted that the Prophet Muhammad waged war against his Jewish neighbors rather than engage in dialogue.

The day after the shootings, a spokesperson of the main liberal opposition party (Venstre), MP Inger Støjberg, went on television and said, "Let me be quite clear: We are dealing with a small group that is abusing the Koran." In other words, once again we are faced with one or more Muslims who have completely misunderstood their own religion. The implication, of course, is that Danes have nothing to fear from the fast-growing number of Muslims and the spread of Islam.

Curiously, the killer, Omar el-Hussein made no bones about the fact he acted in accordance with Islamic teachings. At 3:24 pm Saturday, nine minutes before his attack at Krudttønden, he posted the following comment on Facebook: "I follow Abu Bakr obediently and humbly in bad times as well as good and will not disobey the orders I have been given unless I witness open unbelief."

The Facebook message was revealed by the national daily, B.T., which had it translated from Arabic to Danish. The paper assumes that "Abu Bakr" refers to Abu Bakr al-Baghdadi, the self-proclaimed caliph of the Islamic State.
A little earlier, at 3:01 pm the same day, el-Hussein had quoted the Koran (sura 59, verse 2) on his Facebook page: "It is He who expelled the ones who disbelieved among the People of the Book [Jews and Christians] from their homes at the first gathering. You did not think they would leave, and they thought that their fortresses would protect them from Allah; but Allah came upon them from where they had not expected, and He cast terror into their hearts [so] they destroyed their houses by their hands and the hands of the believers. So take warning, O people of vision."

It would appear that Omar el-Hussein had not "abused" anything but simply followed Allah and his prophet.

How did MP Inger Støjberg, and other politicians who have been saying the same things, know that Danes are up against "a small group"?
It turns out, in fact, that Omar el-Hussein and his accomplices have quite a fan club in and around the Muslim settlement area of Nørrebro in Copenhagen, as demonstrated by this French video published by the blog Gates of Vienna, with English subtitles. Danish television has also interviewed other young Muslims who expressed support for el-Hussein and openly declared that people who dare criticize the prophet -- as, in this case, Swedish artist Lars Vilks -- must be killed.