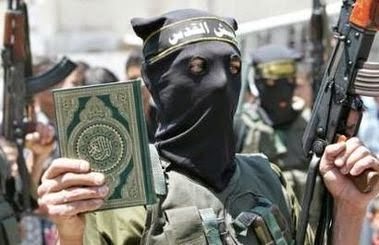 Den egyptiske författaren Alfred Rauf skriver i Mada Masr
om det islamistiska hotet mot Västerlandets demokratiska
system.
Det största hotet idag är det han kallar "the IS within",
d v s de hundratusentals muslimer i Europa som
sympatiserar med Kalifatet.
Han gör en grundlig analys av hur wahhabismen via
regimen i Saudiarabien, Muslimska Brödraskapet och
Al Qaeda skapat dagens Kalifatet IS.
“One day, not very far from now,
Europe will wake up to a nightmare.”
I made this comment to friends during a 2012
visit to Europe. They swiftly dismissed it. Yet
just two years later, with Islamic State (IS)
supporters demonstrating in European streets
and European citizens joining the IS to fight in
Syria and Iraq, it seems that the nightmare has
arrived.
What is most dangerous to Europe is not the
Islamic State itself, but rather, “the IS within.”
Europe’s governments are at a loss as to how to stop
this from happening. Their responses are ineffective,
even futile.
There are no easy solutions, but Europe must tackle
the main roots of the problem: finances, fanatical doctrines
controlling the preaching of Islam in Europe, European
policies toward the Middle East and immigration.
These issues are complex, and the history, doctrines, and
aims of the IS — along with some of the main differences in
the mindsets of its European supporters — must be grasped
if the magnitude of the problem is to be understood.
The Islamic State’s beliefs are rooted in Wahhabism, a
branch of Islam founded in the 19th century that has
spawned several branches since then. Its founder,
Mohamed Ibn Abd al-Wahhab, made an alliance with
Mohamed bin Saud to revolt against the Ottoman Empire
and establish the first Saudi state, which was to be based
on the “true” Islam: the Wahhabi doctrine.
Wahhabism advocates returning to the earliest
Islamic fundamentals, and regards anything that
came after the first three generations of Muslims
as unnecessary innovation. That is why Saudi’s attempts
to foster certain modern practices and its administration’s
alliance with the US has been considered a betrayal of
Wahhabi principles. This perceived betrayal produced
Al-Qaeda, and later, the IS.
Islamic modernism developed parallel to Wahhabism,
primarily in Egypt’s Al-Azhar, and was pioneered by
scholars such as Rifaa al-Tahtawy, Jamal ad-Din
al-Afghany and Mohamed Abduh. They tried to integrate
Islamic principles with European social theories
and advocated a critical reexamination of the
classical concepts of Islam, rereading the revival
of Islam through a 19th century lens.
Through Al-Azhar, Islamic modernism was dominant
in the Muslim world up until the 1960s. This changed
with the 1973 oil crisis quadrupling the price of oil,
providing Wahhabism with all the resources it
needed to reign and even take over Al-Azhar
University.
Since then, the Wahhabi movement has spent
billions of dollars on printing books and sending
missionaries, financing scholars all over the Islamic
world and beyond. This same petrodollar still finances
the IS today.
***
Läs hela artikeln, det förtjänar den...
Upplagd av hcp kl. 17:32