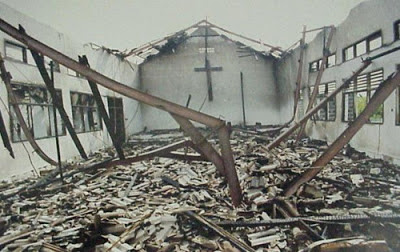 Gatestone Institute ger några vardagsbilder
från islamisternas förföljelse av kopterna i
Muslimska Brödraskapets Egypten.
Bl a väpnade överfall på kyrkobesökare. Läs
också hur Mostafa Kamel, en ökänd islamistisk
åklagare i Alexandria försöker lägga beslag på
en tusenårig koptisk kyrka:
**
A Muslim mob, consisting mostly of Salafis, sur-
rounded St. George Church in the Beni Suef Gover-
norate. Armed with batons, they assaulted Christians
as they exited the church after Sunday mass; five
were hospitalized with broken limbs. The Salafi
grievance is that Christians from neighboring villages,
who have no churches to serve them, are traveling
and attending St. George. The priest could not leave
the church for hours after the mass, even though he
contacted the police; they came only after a prominent
Coptic lawyer complained to the Ministry of the Interior
concerning the lack of response from police.
"I want the whole world to know," he said, "that a
priest and his congregation are presently held captive
in their church, afraid of the Salafi Muslims surrounding
the church."
**
Separately, a group of Muslims, led by Mostafa Kamel,
a prosecutor at the Alexandria Criminal Court, broke
into the Church of St. Mary in Rashid near Alexandria
and proceeded to destroy its altar, on claims that he
bought the 9th century church; in fact it had earlier
been sold to the Copts by the Greeks, due to the
Greeks' dwindling numbers in Egypt.
Two priests, Fr. Maximos and Fr. Luke, rushed to
the police station to try to bring the police to help.
Kamel and his two sons also came to the police
station, where they openly threatened to kill the
two priests and their lawyer.
"We stayed at the police station for over six hours
with the police," Fr. Maximos said, "begging pro-
secutor Kamel and his two sons not to demolish
the church." Fr. Luke said that the prosecutor had
so far lost all the cases he brought against the
church, "So when this route failed, he tried taking
the matter into his own hands."
Upplagd av hcp kl. 14:30