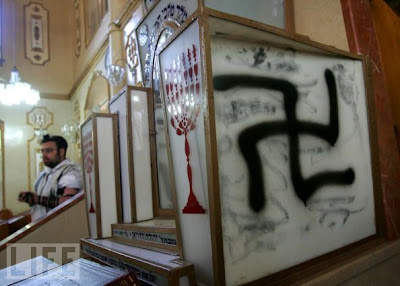 Bara några timmar före Minnesdagen
målade någon tre hakkors och dussintals
"palestinska" flaggor på den gamla Ajami-
synagogan i Jaffa. Samtidigt vandaliserades
en bil som tillhör en judisk familj, som bor
granne med synagogan.
**
Voz is Neias rapporterar:
The site of the vandalism is in the heart of the
Ajami neighborhood, next to the Arab-Jewish
Center and the Ahva Elementary School, where
Jews and Arabs learn together. The synagogue
targeted in the incident is active mainly on weekends.
journalist and photographer Tzur Shizef, who lives
nearby, told Ynet that he presumes the act was
carried out by a young person under the influence
of the incitement against Jews, but is not part of
a widespread phenomenon that will damage
relations between Jews and Arabs in the neighborhood.
**
"There are very few Jewish families here in the
neighborhood, and they are old families that
have very good relations with the surroundings.
The synagogue has been active for dozens of years,
since before the founding of the State when there
was a Jewish majority in the neighborhood.
In my opinion, this act stems from someone messing
with kids' heads that Jaffa 'belongs to us', telling
them they need to fight the Jews. But this is a minority.
It is more an act of foolishness than evil."
Upplagd av hcp kl. 16:00