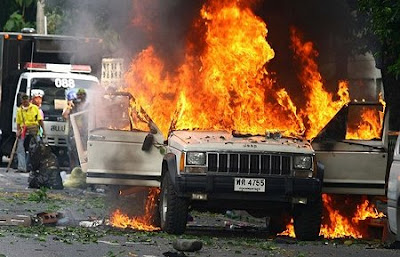 Mycket värdefull information och många intressanta
analyser göms i de stora mängderna offentligt tryck
från amerikanska kongressen och statliga organ.
Råkade snubbla över protokollet från en offentlig
hearing i senatens utskott för Homeland Security.
Senator Lieberman och hans kollegor samlade ett
antal av de främsta experterna på islamism för att
analysera
THE ROOTS OF VIOLENT ISLAMIST EXTREMISM
AND EFFORTS TO COUNTER IT
**
Inte minst intressant är experternas syn på
de organisationer som sällan är direkt
inblandade i terrorism, men som ofta rekryterar
och utbildar morgondagens terrrorister.
**
Den avhoppade Hizb ut-Tahririslamisten Maajid
Nawaz beskriver det islamistiska spektrat så här:
I have identified three types of Islamists.
They are first either political Islamists, who are
those who use entry-level politics and tactics by
working within the system through the ballot box to
try and bring about this ideology.
These are, by and large, people who are nonviolent, yet
they have an ideological agenda. They are in some way
fifth column. Their agenda is to infiltrate the system and
Islamize the system that they are working in.
The second type of Islamist, again, from these four shared
elements, are the revolutionary Islamists, such as Hizb
ut-Tahrir, the group that I was with, and their methodology
is to infiltrate the militaries, to overthrow the regimes of the
Middle East through military coups, and those in this category
do not believe in using the ballot box or working through the
system.
And the final category of Islamists are the militant Islamists,
or the jihadists, who believe in an armed struggle against the
status quo.
***
Dr Zeyno Baran från Hudson Institute, specialist på Muslimska
Brödraskapet, kommenterar några av dess avläggare bland de
revolutionära islamisterna:
Now, let me very briefly discuss two Brotherhood splinter groups
to show how these groups progressively become more radical. Hizb
ut-Tahrir (HT), was founded by a Brotherhood member who over
time wanted to use a more radical methodology and started his
own organization. HT’s key focus has been the creation of a worldwide
Islamic community, Ummah, and the reestablishment of the
Caliphate. For many decades, these ideas were considered extreme.
More recently, they have been adapted as mainstream by most
Islamists.
**
HT members claim to want freedom and justice; but the freedom
they want is, I believe, freedom from democracy, and the justice
they want can only be found under Islamist rule. Under such rule,
Muslims who do not abide by Shariah law will be, in their terms,
considered as apostates and liable to punishment according to Islamic
law. Or to put it more directly, they will be executed.
**
The freedom and justice HT seeks by overthrowing democracy
can often only be attained through violence. However, HT is not
likely to take up terrorism itself. Terrorist acts are simply not part
of its mission. HT exists to serve as an ideological and political
training ground for Islamists. That is why I have called them a
conveyor belt to terrorism. In order to best accomplish this goal,
HT will remain non-violent, acting within the legal system of the
countries in which it operates. Actually the same can be said about
many of the Islamist organizations, including the Brotherhood.
**
These groups do not need to become terrorists because winning the
hearts and minds is much more effective in achieving the ultimate
goal. But, of course, they do not rule out the use of force if they
cannot establish their Caliphate via non-violent means.
**
HT has led to the formation of even more radical and militant
groups than itself, such as al-Muhajiroun. The founder, again, was
at first with the Muslim Brotherhood, then became an Hizb ut-
Tahrir member, and when he had a falling out with the leadership
of HT over tactics, he formed an even more radical organization.
Note that the difference in all these splits was not about ideas or
ultimate goal. It was about how best to achieve them.
Al-Muhajiroun has direct links to Osama bin Laden, to Hamas
and Hezbollah, and blatantly advocates for terrorist acts. Over the
years, it has sent hundreds of British men to Afghanistan and
Pakistan for jihadi training. Some of those came back and attacked
their homeland on July 7, 2005
***
Läs hela hearingen
****
Läs också
"Den islamistiska pyramiden"
och
Visst går terrorns trådar till Hizb ut-Tahrir
Upplagd av hcp kl. 10:00