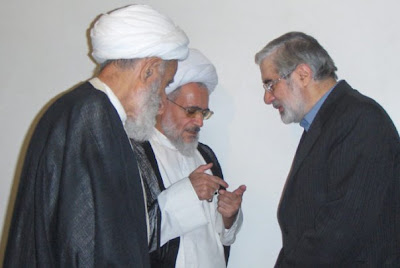 Vice ordföranden för Tysklands Judiska
Centralråd Dieter Graumann varnar
för den expanderande muslimska anti-
semitismen. Varningen föranleds av att
en shiitisk imam och Hizballahanhängare
i Frankfurt/Main tvingats avgå efter
ovanligt grova antisemitiska utgjutelser.
Till slut tröttnade kommunen och hotade
med indragna bidrag om inte imamen
avskedades.....
***
In a related story, Imam Sabahattin
Türkyilmaz of the Shiite Hazrat Fatima
Zehra mosque in Frankfurt resigned all
his positions in the mosque this week,
saying he did so in order to protect the
community, the blessed mosque, to protect
all the families involved, the Muslims of the
city and to protect - although now damaged -
dialog. The Christian Democrats in the city
said they thought it was the logical step, since
the Islamic community was not in a position
to refute the allegations against their imam.
The resignation followed a TV report about
the imam's participation in an anti-Israel
demonstration in Berlin on al-Quds Day
several years ago, where he marched with
demonstrators who cried "Death, death to Israel".
In a speech he gave at a different demonstration
he called in Arabic that "we belong to the community
of Hezbollah", and he expressed anti-Israel
sentiments in a Friday sermon, quoting the
Ayatollah Khomeini's speech against Israel.
The imam had accused the news program of
conducting a smear campaign against him.
**
The vice chairman of the Central Council of
Jews in Germany, Dieter Graumann, warns
of increasing antisemitism among Muslim
immigrants. Especially among youth of Arab
origins it's 'frightfully high', says Graumann in
the latest edition of the German magazine 'Focus'.
There's no point in denying it or in sidestepping
the issue.It's particularly the Muslim communities
who would be served by curbing the anti-Jewish
sentiments among Muslims, according to Graumann.
Although their representatives make official
statements against antisemitism, they don't do
enough among their own people.
"If they'll make more of an effort, the Muslim
communities would win much more credibility,"
according to the vice chairman of the Central
Council of Jews in Germany.
Upplagd av hcp kl. 20:10