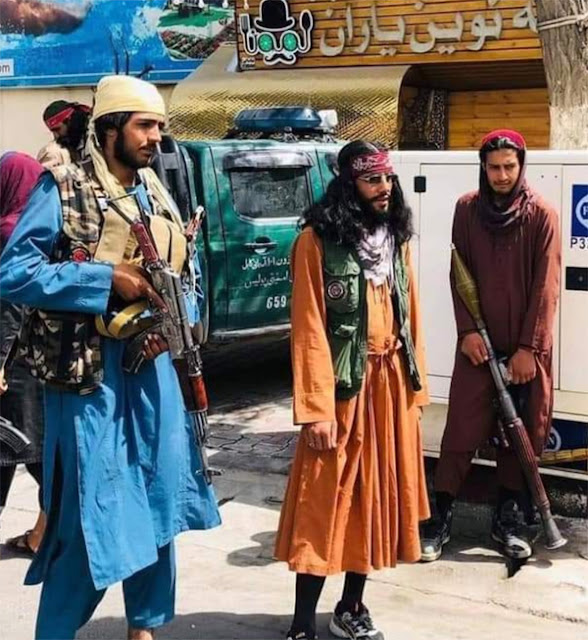 "The Western pullout from Kabul during the Taliban advance on August 16, 2021 was a chaotic and embarrassing mess. This was a global humiliation for the USA and the Western defense alliance NATO.

The Western-backed former Afghan leader, Ashraf Ghani, reportedly departed his country with so much money that it couldn’t all fit in his helicopter. He was thus forced to leave some cash at the airport.

The total costs of the war in Afghanistan between 2001 and 2021 are disputed. However, sums of up to one trillion — one thousand billion — US dollars have been mentioned as reasonably realistic estimates. What did that money achieve? Absolutely nothing. In fact, worse than nothing. The Taliban in August 2021 controlled more territory in Afghanistan than they did in August 2001. And they had better weapons, too.

The Americans and their Western allies spent tens of billions on building up Afghan security forces, including the Afghan National Army and the police force. When the USA and its allies pulled out in 2021, the Afghan army collapsed with astonishing speed. Even the Taliban seem to have been surprised by how quickly any resistance evaporated.

This means that the modern military equipment that was intended to combat the Taliban is now in the hands of the Taliban. Twenty years of fighting, costing perhaps 1,000 billion dollars and the lives of over 3,500 Western soldiers, has simply handed the country back to the Taliban, with some weaponry added as a bonus.

The fact that many Muslims in Afghanistan put up little resistance against the Taliban probably indicates that they like them and share their Islamic sharia ideals. In any case, they deserve the Taliban when they are not willing to resist them. This result could encourage more Jihadist aggression, in Afghanistan and beyond.

When the Soviet Union invaded Afghanistan in 1979, the country became a battleground in the Cold War. The USA and other nations supported various armed Muslim rebel groups in their fight against Soviet forces. After the Soviet Union withdrew in 1989, these Jihadist groups claimed victory.

The Afghan mujahideen included the embryo of what would become the Taliban, as well as foreign militant Muslims such as Osama bin Laden and the terrorist network al-Qaida. Islamic groups such as the Taliban can thus claim that the mighty forces of Allah in Afghanistan defeated two superpowers in just over three decades. This is not an entirely empty boast.

The disaster in Afghanistan was caused by the stubborn inability of Western elites to understand Islamic culture and tribal societies. They believe that other people think like us, and want to become like us. This is both extremely naïve and extremely arrogant at the same time.

Many Muslims do not think at all like we do, nor do they want to become like us. In fact, their religion specifically states that they should conquer us, rule us and eventually convert us to Islam. They have no intention of changing. They are here to change us.

The only sensible solution to this dilemma is to stay out of Muslim countries as much as possible. At most, we can undertake brief military campaigns to achieve critical military objectives, but never anything more than that. Above all, we should do whatever it takes to keep Islam and those who practice it out of our own countries.

The population of Afghanistan and other Muslim nations has continued growing rapidly over the past decades due to high birth rates. This development has been partly facilitated by Western medicine and technology. At the same time, the Muslim immigrant populations in Western Europe have also grown rapidly.

Even within the Islamic world, some countries are more brutal than others. Young men from Somalia and Afghanistan have committed many acts of gang rape, torture and murder in countries such as Germany, Belgium and Sweden. These include male Afghan asylum seekers of fighting age. Yet instead of fighting to make Afghanistan a better country, they come to us, leech off societies that they despise, and sometimes attack us.

Muslim immigration to Europe has caused countless deadly acts of terrorism and violent crime against native Europeans. Yet the ruling elites and the EU seem totally indifferent towards the suffering of the natives. At worst, they act actively hostile to the interest of native Europeans. At best, they are massively incompetent.

When the Titanic on its maiden voyage in April 1912 hit an iceberg and sank, over 1,500 people died. This has sometimes been treated as symbolic for European civilization. Two years later, Europe was plunged into the devastating European civil war that we call the First World War. Some people have compared today’s Western world to the Titanic. Yet Western Europe and the wider Western world is arguably worse than that now. When the crew of the Titanic finally spotted the iceberg, they reacted quickly and tried to steer the ship away from a collision course. It was too late, so they hit the iceberg. Nevertheless, their attempted response came within seconds of being made aware of the problem.

By comparison, the current ruling elites of the Western world have had decades to deal with the problems facing us. It is indisputable that mass immigration, especially Muslim immigration, has caused major social, economic and cultural harm. Yet despite overwhelming evidence, the captains still refuse changing course. They head straight for the iceberg, claiming that hitting it will be culturally enriching and good for the economy.

All warnings about an impending disaster are dismissed as hate speech and icebergophobia."