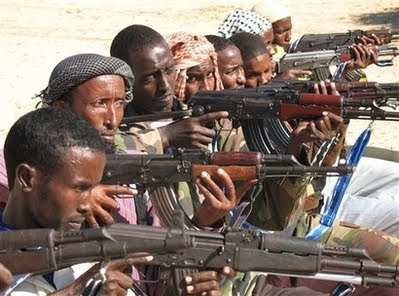 "A number of Western countries with large Somali

populations have seen people disappear to .

In the , this phenomenon has been

primarily associated with the Minneapolis-St. Paul

are credible reports of disappearances in other

and federal investigations of the disappearances are

While most people who disappeared in this manner

are of Somali descent, a number of non-Somalis—

such as Daniel Maldonado, Ruben Shumpert, and

Troy Kastigar—have also gone to to

International reporting shows that in addition to the

cases in the , disappearances have occurred

in other countries with large diaspora communities.

The has the largest Somali population in ,

Islamic extremists have returned to from

Peter Neumann of the International Centre for the

Study of Radicalisation and Political Violence at

“The numbers I hear (going from to )

people have left to join al-Shabaab.

This includes people of various ethnicities, not just

the press that 20 to 30 Canadians have joined

al-Shabaab, a development that the country’s public

safety minister has said “alarmed” him.

that between 10 and 20 Somali refugees have returned

to their homeland to join the fight, Australian authorities