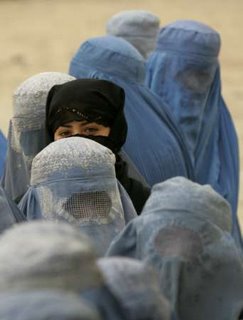 A German parliamentarian of Turkish
origin has called for Muslim women to
throw off their headscarves and embrace
Western values. After receiving death
threats for the remarks, she is under
police protection. Politicians are
defending her right to free speech.


A Turkish-German parliamentarian
has received death threats for
her critique of the head scarf.
With the increased focus on
immigrants in Germany, it sometimes
seems like integration success
stories don't exist.
They do.
And Ekin Deligöz is one of the
country's finest.
A Turkish-born German citizen,
she now serves in the seat of German democracy,
the Bundestag. But, cultural emissaries like Deligöz
don't only build bridges, they also
sometimes expose the vast differences
that make their existence so crucial.
Läs artikeln på Spiegel Online
Upplagd av hcp kl. 12:47