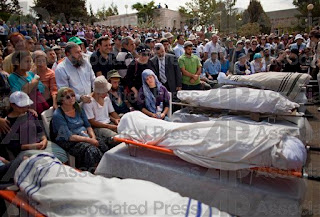 Uppdatering av
Gårdagens Hebronmassaker
får konsekvenser
Fem judar mördade av EU:s
skyddslingar
***
Hebrons informationschef (och den flitige
bloggaren) David Wilder har mycket att
säga om gårdagens massaker.
Så här sammanfattar han dådet:
This is pure, unadulterated barbarity,
brutality characteristic of our ‘piece
partners.’ This may very well only be
the beginning.
***
Se hela artikeln:
It’s been a while since I photographed
dead bodies. The last time I remember
clearly was the murder of Yossi Shok
from Beit Haggai who was shot and
killed similarly on a Friday afternoon
a few years ago. That attack entailed
a few miracles. I recall that there were
others in the car, teenage girls, who
miraculously weren’t hurt.But tonight,
no miracles.
**
This morning, speaking with a friend,
talking about the renewed ‘piece talks’,
I told him that more than likely today
or tomorrow terrorists would strike.
It was just a question of where – around
here, the Shomron, or Jerusalem or Tel
Aviv.
Tonight we received our answer.
Leaving Ma’arat HaMachpela after evening
prayers, the beeper beeped. A car had been
shot at. A quick phone call, confirming
that Jews had been hit, four critically, and
I sped off. I had been at the scene of the
shooting only a few hours ago, examining
how Arabs were stealing water from Jews
in the area.
**
By the time I arrived, the description had
changed. No longer four critically wounded.
Four dead. Four killed, shot by terrorists,
on their way home. The terrorists’ lives have
been made much easier in the past year or
so, with various roadblocks being removed
in Judea and Samaria. Now it’s fairly simple
to access roads used by Jewish civilians,
shoot, and then escape.
The scene was reminiscent of others I’ve
witnessed in the past. Ambulances, jeeps,
police, medics, soldiers, officers, red lights
flashing….and bodies.
**
It’s been a long time since I’ve seen four
bodies on the street, murdered by Arabs
only because they are Jews, living in
Israel. I sit here, half numb, almost not
believing, but knowing that, yes, it’s real.
And what to do?
****
Svaret får du genom att läsa resten
av artikeln.
****
Haaretz har ett överraskande bra
reportage från offrens begravning
****
Israel Jewish News
Upplagd av hcp kl. 17:00