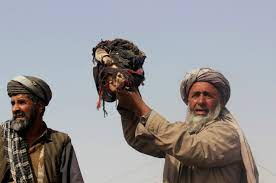 Nov. 30 (UPI) -- After forcibly sweeping back to power in Afghanistan in August, the Taliban executed over 100 former police and military members, according to a report released Tuesday by Human Rights Watch.

The 25-page report, titled "No Forgiveness For People Like You," describes how the Taliban rounded up former members of the Afghan National Security Forces, which includes police, intelligence service members, military personnel and militia.

After seizing power on Aug. 15 amid the withdrawal of U.S. troops, the Taliban promised amnesty to anyone who had opposed them, including former government and military employees and their families.

The reports confirmed that 47 people disappeared or were killed by the group between Aug. 15 and Oct. 31.

It also found credible information that more than 100 people were executed in four provinces alone. The report focuses on the Ghazni, Helmand, Kandahar and Kunduz provinces, but also says the same pattern of abuse likely extends beyond that.

Bilal Karimi, a deputy spokesman for the Taliban, told CNN he rejected the HRW's findings and that the Taliban established amnesty when it took over.

"Based on that, all military and non-military personnel of the former government were forgiven and told they could live normally in Afghanistan, that no one could harm them," Karimi said, acknowledging there were events when "some former forces were harmed," but not as many as reported.

The HRW report is based on 67 interviews with witnesses, relatives and friends of victims, as well as Taliban fighters with firsthand knowledge. It goes on to say members of the Taliban have also targeted family members of former security force members.