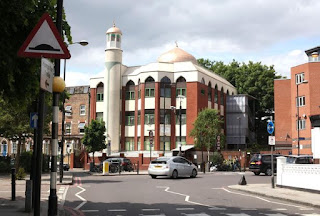 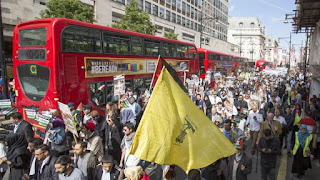 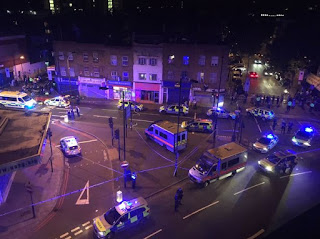 
Al Qaeda operatives including "shoebomber" Richard Reid and Zacarias Moussaoui attended the mosque. In 2002, The Guardian reported that weapons training had taken place inside the building.
The mosque rose to notoriety after Abu Hamza al-Masri became Imam of the Mosque, due to his extremist ideologies and views on terrorism. However, in 2003 the Mosque was raided by the Police and shut down.

According to classified American documents, released by Wikileaks, Finsbury Park mosque previously served "as a haven" for Islamic extremists who subsequently fought against allied forces in Afghanistan. 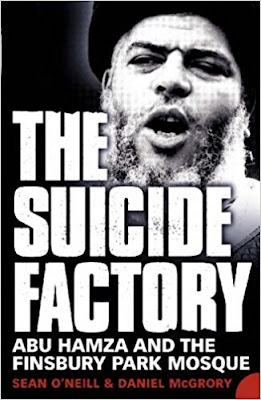 
"Two veteran journalists tell the inside story of convicted hate-monger Abu Hamza, his infamous Finsbury Park Mosque and how it turned out a generation of militants willing to die – and kill – for their cause…

In the heightened atmosphere following the terrorist attacks on 9/11, Mostafa Kemal Mostafa, aka. Abu Hamza al-Masri, was a gift to tabloid newspapers. His prosthetic hook hand, glass eye and rabid pronouncements as imam of the Finsbury Park Mosque made him the very image of a bogeyman, easily caricatured and ultimately dismissed by intelligence analysts who judged him offensive, but essentially foolish. They were wrong.

In this chilling investigation, senior news journalists Daniel McGrory and Sean O’Neill reveal that the imam recently convicted for inciting murder and racial hatred not only indoctrinated vulnerable young Muslims into a firebrand version of Islam, but supported Taliban leaders, had direct contact with al-Qaeda and recommended recruits for terrorist training camps in Afghanistan. Under Abu Hamza's leadership, the north London mosque became a place where young zealots were taught hand-to-hand combat, the use of knives, how to dismantle and reassemble firearms and surveillance techniques. Amongst the extremists who looked to Abu Hamza for leadership were Zacarias Moussaoui, the so-called twentieth hijacker from the attacks of 9/11, and Mohammed Sidique Khan, the ringleader of the 7 July London bombings.

Using the account of an inside informant, the jail diary of a former recruit, security records and recollections of followers and associates of the imam, the authors dig behind the notoriety Abu Hamza has been content to foster for the real story of a larger-than-life man who has lied repeatedly about his background, his first (bigamous) marriage to an Englishwoman and even the cause of his famous injuries. Even more alarmingly, they reveal how British security forces for years allowed the Egyptian’s training ground to thrive, turning a blind eye to the dangers of home-grown extremism and permitting some of the most fanatical elements from around the world to establish London as their base…"
https://www.amazon.co.uk/Suicide-Factory-Hamza-Finsbury-Mosque/dp/0007234694