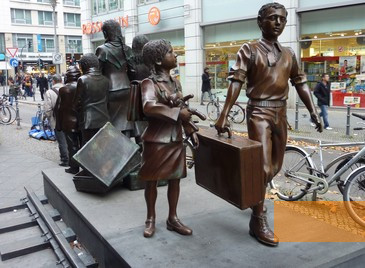 Minnesmärket KINDERTRANSPORT vid Bahnhof Friedrichstrasse i Berlin
Tänkvärt ur Jerusalem Post:
BERLIN – The spokesman for Hamburg’s Jewish community, Daniel Killy, said deteriorating security in Germany has led to a highly dangerous situation for Jews.
“No, we are no longer safe here,” Killy told the news outlet tagesschau.de on Tuesday. He said the disintegration of state power, excesses of the extreme right-wing, the loss of political credibility, and “the terrible fear of naming Islamism as such” have contributed to an insecure environment for Jews. Hamburg's Jewish community has nearly 2,500 members.

Germany has absorbed over one million refugees from mainly Muslim-majority countries. German Jewish leaders have warned about rising anti-Semitism because the refugees are socialized in countries that are steeped in hatred of Jews and Israel.

The detailed tagesschau.de report, which was authored by Patrick Gensing, an expert in extremist ideologies, wrote that anti-Semitic sentiments have diverse manifestations in Germany. He cited studies that point to “historical defensive guilt [about the Holocaust], obsessive criticism of Israel, National Socialist racism, Muslim anti-Semitism [and] Christian anti-Semitism.”

Gensing wrote about a “wave of hatred” at the “hate-filled demonstrations against the Gaza War” in 2014. An Israeli couple were attacked during that period. Also, three Palestinians attempted to torch a Wuppertal city synagogue – one that had previously been burned by Germans in 1938. A local court sentenced the Palestinians to probation and stated that the act of arson was not anti-Semitic because the men sought to draw attention to the Gaza war.

The regional court on Monday imposed a more severe sentence on the men – Ismael A., 29, Muhammad E., 25 and Jamil A., 19. German media protects perpetrators’ and victims’ privacy by not citing their full last names. Two of the men are from the West Bank and the other is from the Gaza Strip. It is unclear what the increased punishment is.

According to a Monday Spiegel article, the approximately 2,000 Jews in Wuppertal no longer feel safe. The head of the Wuppertal Jewish community, Leonie Goldberg, said, “I thought the time of the packed suitcases was for always over. Now I am considering when we need to again pack these suitcases.”

In 2015, approximately 200 German Jews made aliya. The number is considered high given that Germany’s Jewish population falls into an older age demographic.
﻿
Upplagd av hcp kl. 23:00