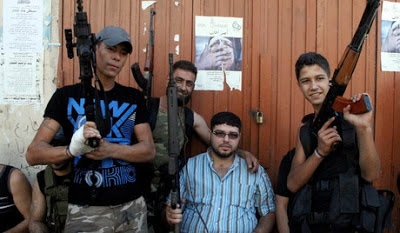 I all hast,
några nya notiser om
EU:s uppladdning mot Syrien:
***
West Training Syrian Rebels in Jordan
Western training of Syrian rebels is under way in
Jordan in an effort to strengthen secular elements
in the opposition as a bulwark against Islamic
extremism. Jordanian security sources say the
training effort is led by the U.S., but involves
British and French instructors. British and French
officials say new EU rules have given the green
light to start providing military training for rebel
fighters as long as the ultimate aim is "the protection
of civilians." The Western training in Jordan has been
going on since last year and is focused on senior
Syrian army officers who defected. A Jordanian
source said there had so far been no "green light"
for the rebel forces being trained to be sent into
Syria. (Guardian-UK)
**
Report: U.S. and Europe in "Major Airlift of
Arms to Syrian Rebels through Zagreb"
The U.S. has coordinated a massive airlift of arms
to Syrian rebels from Croatia with the help of Britain
and other European states, according to the Croat
newspaper Jutarnji List. It claimed 3,000 tons of
former Yugoslav weapons have been sent in
75 planeloads from Zagreb airport to the rebels,
largely via Jordan since November. Jordanian
International Air Cargo's Russian-made Ilyushin
jets have been seen regularly at Zaghreb airport
in recent months. Ex-Yugoslav weapons have
been seen in growing numbers in rebel hands in
online videos. The shipments were allegedly paid
for by Saudi Arabia. (Telegraph-UK)
***
Den som händelsevis fortfarande tror att
det finns något slags "moderata" jihadister,
se denna filmsnutt...
Upplagd av hcp kl. 05:00