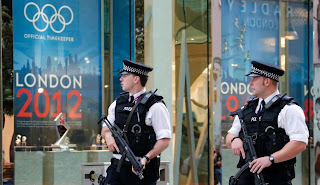 Sunday Times avslöjar idag att det
gått ut ett larm till alla säkerhets-
tjänster: En iransk terrorgrupp finns
redan i Europa för att slå till mot
Olympiaden och då särskilt mot de
israeliska deltagarna.
Det handlar om vita konvertiter med
europeiska och amerikanska pass.
Minst en uppges ha svenskt pass.
**
The Mossad, says the Sunday Times,
"is hunting a group of white Europeans
who are thought to have converted to
Islam and to be working with the Iranian
Quds force and Hezbollah, the terrorist
group backed by Tehran.
"One of the Israelis’ targets is thought to
be a terrorist carrying a US passport under
the name of David Jefferson, who is be-
lieved to have fled after the Burgas attack"
and "is thought to have another powerful
device" like that used in last week's bomb-
ing, said the report.
According to the Sunday Times, "Security
experts say the Quds force — a unit of
the Iranian Revolutionary Guards — has
recruited a number of white European
Islamic converts, including two Ger-
mans, one from Sweden and a couple
of Britons."
New York police believe Iranian Revolutionary
Guards or their proxies have been involved
so far this year in nine plots against Israeli
or Jewish targets around the world, according
to restricted police documents obtained by
Reuters.
**
According to a report by the Sunday
Times, more than 17,000 troops and
7,000 private security guards will secure
the Olympic Park and 26 other venues,
and an additional 12,500 police will
be deployed to patrol London's streets
in a "series of 'rings of steel.'"
The Sunday Times reports further that
"panic rooms have been installed beneath
the stadium as a haven for VIPs and
spectators in the event of an attack."
***
Haaretz
Upplagd av hcp kl. 17:30