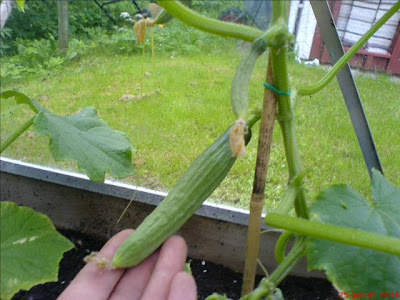 I islamistens värld finns det mycket
som är HARAM, orent. Alltifrån mat till
människor. Den här artikeln visar hur
lågt människan kan sjunka genom en
kombination av religiös fanatism och
ren okunnighet.
***
A bizarre ruling banning women from buying
suggestively shaped vegetables such as cucumbers,
and the brutal slaying of children, lost Al Qaeda
the support of the Iraqi population, it emerged
yesterday.
*
Al Qaeda's enforcement of a severe form of
Islamic law sapped support among the people
for its campaign against American and Iraqi
forces, allowing Arab tribal leaders to drive
Al Qaeda out of the strongholds it had created.
Sheikh Hameed al-Hayyes, a Sunni tribal
leader from a former Al Qaeda stronghold
in the west of Iraq, said: 'I saw them slaughter
a nine-year old boy like a sheep because his
family didn't pledge allegiance to them.'
*
Life under Al Qaeda was not only violent but
also farcical.
'They even killed female goats because their
private parts were not covered and their
tales were pointed upward,' Hayyes said.
'They regarded the cucumber as male and
tomato as female. Women were not allowed
to buy cucumbers, only men.'
Men would have fingers cut off for smoking,
hair salons and shops selling cosmetics were
bombed, and ice-cream salesmen were killed
because ice cream was not available during
the time of Islam's Prophet Mohammad.
*
'Al Qaeda wanted to kill me and blow up my
shop because I sold music CDs,' said Ahmed
Yasin from Samarra, north of Baghdad.
Singing, shaving and the medical treatment
of women by male doctors were all among
activities considered by Al Qaeda to be
forbidden by Islam.
*
'Al Qaeda prohibited the shaving of beards
and banned sideburns and long hair.
'Barbers were killed because they did not
obey,' said Kais Amer, a barber from Mosul
in the north of Iraq.
Leaflets threatened women with kidnap
or death for not wearing an all-enveloping robe.
The forced marriage of Iraqi women and girls
to al Qaeda members by tribes intimidated by
the group was not uncommon.
Disgusted by such acts, Sunni Arab tribal leaders
- whose men once formed the backbone of the
insurgency against American and Iraqi forces -
turned on Al Qaeda in late 2006, and with American
backing helped to remove Al Qaeda.
*
Until the overthrow of former President
Saddam Hussein in 2003, Iraq was largely secular
in outlook.
Iraqis of different sects and ethnicities inter-
married, women would dress in jeans and T-shirts
and Baghdad was packed with bars and discos.
America claims that Iraqi rejection of the Al
Qaeda rules is one reason behind a drop in the
number of bomb attacks targetting Iraqi
civilians and coalition troops.
(Daily Mail)
***
Glöm inte uppropet
Stopp för Sharia
Sprid och skriv under !
Upplagd av hcp kl. 12:00