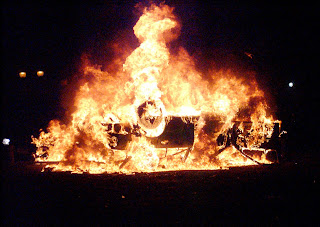 Fjordman publicerade igår en värdefull
artikel i tyska Junge Freiheit:
Europa som världens sjuke man
**
Ilya Meyer skriver med rätta
Artikeln borde vara obligatorisk läsning för
Europas samtliga utrikesministrar och för
alla som läser på journalisthögskolor i Europa.
**
Ett litet utdrag ur artikeln:
I have studied Arabic language at the American
University in Cairo and lived in Egypt during the
terror attacks of September 11th 2001.
I am not sure I would describe this as a turning
point since I was already growing skeptical of
Islamic culture and mentality before that time,
but things certainly escalated after this event.
What shocked me the most, though, was not
witnessing how happy many Arabs and Muslims
were over the mass murder of thousands of
unarmed civilians.
What shocked me the most was how Western
mass media and the political establishment lied
about this fact. 9/11 was in my view clearly
an Islamic Jihadist act of war against Western
civilization, yet the West was in complete denial
about this.
(...)
I haven’t talked a lot about war, I am merely
pointing out that Islam declared war against
Europe and the rest of mankind 1400 years
ago.
This is not “extremism.”
Mainstream Islam stipulates that Jihad
should continue until every single corner
of our planet has been firmly placed
under Islamic rule.
Portraying Europeans as aggressors after
having been at the receiving end of an
unprovoked Islamic campaign of
aggression and conquest for over a
thousand years is patently absurd.
That being said, I am very much against
some of the policies currently pursued
by Western government and political elites.
I am personally in favor of a strategy the
American writer Lawrence Auster has dubbed
separationism: We should physically
separate ourselves from Islam and everything
Islamic as much as is practically possible in
an age of global communications, and limit
ourselves primarily to brief interventions
only when these countries pose a direct
military threat to us.
Undermining secular leaders like Mubarak in
Egypt and aiding radical Islamic forces, as
Western leaders have been busy doing
following the so-called Arab Spring in 2011
that looks more and more like a Sharia Winter,
is stupid and dangerous and could backfire badly.
***
Läs hela artikeln
Upplagd av hcp kl. 15:30