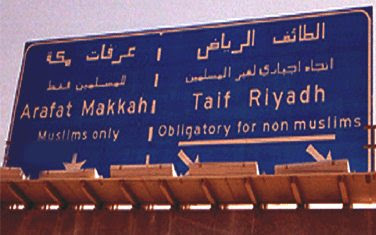 Vår vän Fjordman
(som tyvärr stängt sin egen blogg
men ofta skriver i bl a Brussels Journal)
har larmat oss kollegor om ett
upprörande fall av islamistisk censur.
**
Cambridge University Press has agreed to destroy
all unsold copies of a 2006 book by two American authors,
"Alms for Jihad," following a libel action brought
against it in England, the latest development in
what critics say is an effort by Saudis to quash
discussion of their alleged role in aiding terrorism.
Se WorldNetDaily
Se New York Sun
Se Jihad Watch
Vad handlar då boken om ?
There has been a dramatic proliferation of
Islamic charities recently.
While most are legitimate, considerable
evidence reveals that others have more
questionable intentions, and that funds have been
diverted to support terrorist groups,
such as al-Qaeda. The authors examine
the contention through a detailed investigation of
the charities involved, their financial intermediaries,
and the terrorist organizations themselves.
What they discover is that money from
these charities has funded conflicts across
the world, from the early days in Afghanistan,
to subsequent terrorist activities in Asia,
Africa, Palestine and, most recently,
Europe and the United States.
Upplagd av hcp kl. 22:25