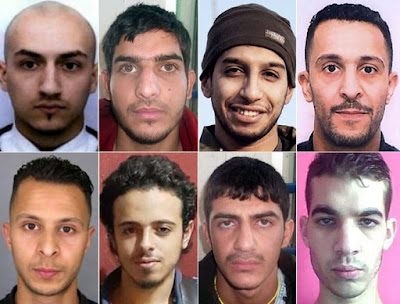 by Soeren Kern
September 3, 2017 at 6:00 am
https://www.gatestoneinstitute.org/10929/europe-jihadists-migrants


German authorities are hunting for dozens of members of one of the most violent jihadist groups in Syria, Jabhat al-Nusra, but who, according to Der Spiegel, entered Germany disguised as refugees.
The men, all former members of Liwa Owais al-Qorani, a rebel group destroyed by the Islamic State in 2014, are believed to have massacred hundreds of Syrians, both soldiers and civilians.
German police have reportedly identified around 25 of the jihadists and apprehended some of them, but dozens more are believed to be hiding in cities and towns across Germany.
In all, more than 400 migrants who entered Germany as asylum seekers in 2015 and 2016 are now being investigated for being members of Middle Eastern jihadists groups, according to the Federal Criminal Police (Bundeskriminalamt, BKA).
The revelation comes amid new warnings that jihadists are posing as migrants and arriving from North Africa on boats across the Mediterranean and onto Italian shores. In an interview with The Times, Libyan Prime Minister Fayez al-Sarraj said that jihadists who had been able to pass undetected into his country were almost certainly making their way into Europe.
"When migrants reach Europe they will move freely," said al-Sarraj, referring to the open borders within the European Union. "If, God forbid, there are terrorist elements among the migrants, any incident will affect all of the EU."
Independent MEP Steven Woolfe said:

"These comments show the problem to be two-fold. Firstly, potential terrorists are using the Mediterranean migrant trail as a way of entering Europe unchecked. Secondly, with Europe's lack of borders due to Schengen rules, once in Europe, they are able to move from one country to another freely. Strong borders are a necessity."

Around 130,000 migrants arrived in Europe by land and sea during the first eight months of 2017, according to the International Organization for Migration (IOM). The main nationalities of arrivals to Italy in July were, in descending order: Nigeria, Bangladesh, Guinea, Ivory Coast and Mali. Arrivals to Greece were from Syria, Iraq, Afghanistan, Pakistan and Congo. Arrivals to Bulgaria were from Syria, Afghanistan, Iraq and Turkey.
In recent weeks, traffickers bringing migrants to Europe have opened up a new route through the Black Sea. On August 13, 69 Iraqi migrants were arrested trying to reach the Romanian Black Sea coast, having set off from Turkey in a yacht piloted by Bulgarian, Cypriot and Turkish smugglers. On August 20, the Romanian Coast Guard intercepted another boat carrying 70 Iraqis and Syrians, including 23 children, in the Black Sea in Romania's southeastern Constanta region.
A total of 2,474 people were detained while trying to cross the Romanian border illegally during the first six months of 2017, according to Balkan Insight. Almost half of them were caught while trying to leave Romania for Hungary. In 2016 only 1,624 migrants were detained; most were found trying to cross from Serbia to Romania.
Meanwhile, more than 10,000 migrants reached Spanish shores during the first eight months of 2017 — three times as many as in all of 2016, according to the IOM. Thousands more migrants have entered Spain by land, primarily at the Spanish enclaves of Ceuta and Melilla on the north coast of Morocco, the European Union's only land borders with Africa. Once there, migrants are housed in temporary shelters and then moved to the Spanish mainland, from where many continue on to other parts of Europe.
Frontex, the European Border and Coast Guard Agency, has warned that jihadists are using the migration crisis to enter Europe and plot attacks across the continent. Frontex It has also conceded that it does not know the true number of migrants who have crossed into Europe and has no way of tracking them. In its annual risk analysis for 2016, Frontex wrote:

"The Paris attacks in November 2015 clearly demonstrated that irregular migratory flows could be used by terrorists to enter the EU. Two of the terrorists involved in the attacks had previously irregularly entered through Leros [Greece] and had been registered by the Greek authorities. They presented fraudulent Syrian documents to speed up their registration process.
"False declarations of nationality are rife among nationals who are unlikely to obtain asylum in the EU, are liable to be returned to their country of origin or transit, or just want to speed up their journey. With a large number of persons arriving with false or no identification documents or raising concerns over the validity of their claimed nationality — with no thorough check or penalties in place for those making such false declarations, there is a risk that some persons representing a security threat to the EU may be taking advantage of this situation."

In an August 31 interview with the Spanish newspaper El Mundo, Gilles de Kerchove, the EU's Counterterrorism Coordinator said that more than 50,000 jihadists are now living in Europe:

"Three years ago, it was easy to identify someone who has become radicalized. Now, most fanatics disguise their convictions. We do not have exact figures, but it is not difficult to do approximate calculations. United Kingdom, it is not a secret, it has been published, it has 20,000. France, 17,000. Spain much less, but more than 5,000, I suppose. In Belgium almost 500 have gone to Syria and there are about 2,000 radicals or more. I would not venture to a specific figure, but tens of thousands, more than 50,000."

In an interview with the Belgian daily Le Soir, de Kerchove warned that even if the Islamic State is militarily defeated, it will continue to thrive as a "virtual caliphate." He also said that Europol, the European police office, has identified at least 30,000 active jihadist websites, but that EU legislation no longer requires internet service providers to collect and preserve metadata — including data on the location of jihadists — from their customers due to privacy concerns. De Kerchove said this was hindering the ability of police to identify and deter jihadists: "On metadata, I confess that we pull our hair out."

Soeren Kern is a Senior Fellow at the New York-based Gatestone Institute.