Fjordman: A Civilization of Zombies 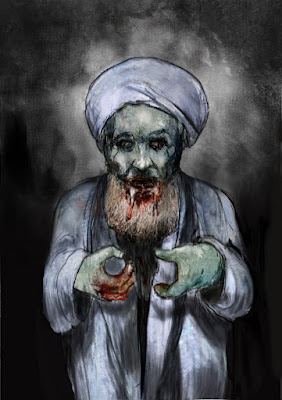 I remember watching a drone video during the height of the immigrant influx to Europe in 2015. The scenes were absurd. With the huge masses of people on the move, it resembled a film of some kind. At one point, I thought it looked vaguely like a zombie movie.
Then the thought occurred to me: If this is a zombie movie, who are the zombies here? We, or the migrants?
While not being a huge fan of the genre, I have seen a couple of zombie movies. Zombies are often portrayed as creatures with very limited remaining functioning brain capacity. Basically, they move around aimlessly and make incoherent sounds. Apart from a desire to feed, they have no clearly discernible goals.

This description does not fit the many illegal immigrants from the Islamic world and Africa that are forcing their way into Europe. These people have very clearly defined goals in their brains and pursue these goals with determination. They certainly want our wealth and status. Some of them probably want our lands.
The people who act the most like zombies in today’s reality are many Europeans. An example of this would be Stefan Löfven. He has been the leader of the Swedish Social Democrats since 2012 and the Prime Minister of Sweden since 2014.
In early April 2017, the Swedish broadcaster TV4 showed secret footage of the privately-run Al-Azhar Primary School in a Stockholm suburb. Boys were seen entering a bus from the front and girls from the back. The Muslim school’s vice principal claimed it had no intention of separating children by sex.[1]
“I think this is despicable. This doesn’t belong in Sweden,” Prime Minister Stefan Löfven told reporters. “We take the bus together here, regardless if you’re a girl or a boy, woman or a man.”[2]
Löfven was shocked to discover that some of the Muslims he and others have admitted to his country still behave like Muslims. PM Löfven seems to move from place to place in a continuous state of shock and disbelief. Just a few days later, he was shocked again.
On April 7, 2017, a Muslim man drove a hijacked beer truck at high speed through crowds in a busy pedestrian street in central Stockholm before crashing into a department store. Four people were killed and many seriously wounded.
The terrorist came from Uzbekistan in Central Asia. His application for residency was rejected in June 2016. He was being sought by immigration officials, but had remained in the country illegally. Police say the man had expressed sympathy for Jihadist groups such as the Islamic State.[3]
Prime Minister Stefan Löfven stated that the country was “in a state of shock” over the attack.[4] I was not. I was dismayed by the deadly brutality, of course, but not at all surprised that such an attack took place. In fact, I had predicted it less than a week earlier.
A previous Islamic terror attack in Sweden took place on December 11, 2010. It, too, happened on a busy street in central Stockholm. The terrorist Taimour Abdulwahab al-Abdaly, an Iraqi-born Swedish citizen, carried out the first Muslim suicide bombing in Scandinavia.[5] Fortunately, he only managed to kill himself. However, he could have murdered many people that day.
Since then there had not been a Muslim terror attack in Sweden for more than six years. This is remarkable, given how many Muslim Jihadists the country has imported and exported during that same time period.
I discussed this puzzling fact with some Swedish friends in early April 2017. The only explanation we could come up with is that Sweden is viewed by militant Muslims as such a useful and submissive host that they choose not to target it just yet. They prefer to be pampered by the welfare state, receive free healthcare and perhaps have sex with some local women, with or without their consent.
However, I pointed out that Belgium had been in a similar situation before. It has long been a breeding ground for Jihadists. With the Brussels bombings on March 22, 2016, Jihadists then launched mass casualty attacks in Belgium itself.
Sweden was now in a comparable situation. In early 2017, it was revealed that more than 150 militant Muslims had returned to Sweden after having supported the Islamic State in Iraq and Syria (ISIS).[6] These people have directly or indirectly supported brutal terrorist attacks, massacres, beheadings and slave auctions. Nevertheless, they are not arrested. On the contrary.
The policy is that local municipalities offer them driving licenses and housing grants in order to reintegrate these hardened Jihadists into Swedish society.[7]
A country simply cannot import and export a large number of militant Muslims for years and itself remain immune from the Muslim terror threat. By that logic, an Islamic terrorist attack on Swedish soil was long overdue. The only surprising thing about the attack in Stockholm is that so many people are surprised.
The reactions to the Stockholm terror attack are predictable: Nothing really changes. A few days of tears, candles and singing. Then business as usual.

Western mass media and political elites no longer respond rationally to genuine threats. Whatever functioning brain power they still possess is used to implement a Globalist agenda of open borders and mass migration.
However, sometimes one gets the impression that they really do not think much at all. Western ruling elites behave in an almost zombie-like manner. They mindlessly walk from disaster to disaster, never understanding what caused the previous catastrophe and not doing anything substantial to prevent the next one.
Is this what we have been reduced to? A civilization of zombies?
Co-published with Gates of Vienna, If you appreciate this essay by Fjordman, please consider making a donation to him, using the button at the bottom of this post or mobile Pay here, mark “Fjordman”