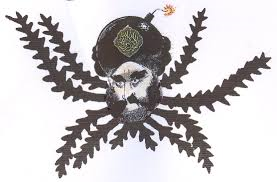 A little background: Haney’s research on Islamist movements—rather than a narrow focus on membership in proscribed terrorist organizations derived from such movements-- won the respect of his peers, many of whom are quoted in the book.
Haney was commended for identifying over 300 possible terrorist suspects and working on important and complex counter-terrorism cases. He and 10 colleagues were honored by a FBI Special Agent-in-Charge for proactively contributing to 98 FBI investigations, identifying 67 individuals engaged in suspicion activity who were previously known to the Joint Terrorism Task Force and identifying 24 persons of interest.
He developed a database of 185 Islamist terrorist groups in 81 countries and associated Islamist movements, believing that we need to “connect the dots” between the movements and radicalization, instead of only “connecting the dots” between individual jihadist operatives.

Investigations into Islamist movements like the Tablighi Jamaat and Muslim Brotherhood were stopped by the federal government in the name of religious liberties.

The National Targeting Center investigation into the networks resulted in over 1,200 law enforcement actions, such as denial of visas to Jamaat members who wanted to enter the country. Then the State Department Civil Rights Division intervened.
“We know that members of the Tablighi Jamaat are fundamentalists, but they’re not terrorists,” Haney recalls a State Department representative informing him and his colleagues.
They informed the State Department official that its own consular officers were rejected three out of four Tablighi Jamaat-affiliated visa applications because of security concerns. That soon came to an end.
The same story happened with the Muslim Brotherhood, despite the fact that the U.S. Muslim Brotherhood and Hamas are an intertwined network, as shown by the Justice Department in the trial of a Brotherhood front (Holy Land Foundation) for financing Hamas.

The hard work of the investigations was not only stopped; it was thrown out. Haney was ordered to delete over 800 records related to Islamist extremists.
Haney calls it the “great purge” and counter-terrorism personnel unconnected to him have also talked about databases related to Islamist extremist movements being cleansed.
Thanks to the DHS Office of Civil Rights and Civil Liberties, a narrow focus on illegal activity in support of banned terrorist organizations took hold. The DHS deemed that data collection related to permitted Islamist movements like Tablighi Jamaat and Muslim Brotherhood is a threat to religious freedom and must be deleted in order to prevent profiling.

The deleted files may have prevented the “underwear” bomb plot, the Boston bombings and the San Bernardino attacks.
Haney’s story, along with copious amounts of other evidence, proves the worthiness of targeting the “radicalizer” (Islamist movements) and not just the radicalized (the jihadist terrorist). Underwear bomber Umar Farouk Abdulmutallab, the Tsarnaev brothers, and San Bernardino shooters Syed Rizwan Farook and Tashfeen Malik all associated with Islamist movements and institutions that were investigated by Haney and his colleagues. Had they continued, it is likely that they would have been denied visas into the U.S. and/or been put under surveillance.. He was exonerated each time.

When one of their own acclaimed experts offered to explain Islamism and its networks, the higher-ups didn’t even reply.
This is a bipartisan problem, as Haney can attest to. He saw the problems develop starting in 2006 under the Bush Administration with each year getting progressively worse. When the Department of Homeland Security began adopting politically-correct language that avoided the ideology, setting a precedent that the Obama Administration would later intensify, Haney offered to explain the ideology and his concerns to his supervisors and anyone who would listen. No one replied.

DHS even rejected the FBI’s request to use him for investigating a Muslim Brotherhood front.
Haney wasn’t just stopped from pursuing his investigations within Customs and Border Protection (which is part of DHS), his supervisors even stopped him from helping the FBI in regards to a Brotherhood front. He was not even told whether they replied to the FBI agent’s request for his help.

Senior officials intervened to let Islamists fly into the U.S. against the advice of their own personnel.
In addition to the changed attitude towards letting Tablighi Jamaat members into the U.S., the federal government also granted entry to terror-linked Muslim Brotherhood activist Jamal Badawi. Customs and Border Patrol had even prepared a dossier making the case against letting him.
Badawi’s complaints about receiving secondary inspections when traveling to the U.S. and lawsuit worked. The Brotherhood/Hamas-linked activist was allowed to enter the U.S. to speak at a Brotherhood/Hamas-linked organization’s conference.

Six individuals affiliated with Muslim Brotherhood fronts helped craft the Obama Administration’s Countering Violent Extremism approach to counter-terrorism.
The result, as you might have expected, was Islamist-friendly training guidelines; ones that even excluded “Muslim reformers” as trainers. You can read more the Clarion Project’s review of these guidelines and the personnel responsible here. Most recently, the Obama Administration picked an activist linked to a Brotherhood front as its liaison to the Muslim-American community.

Haney documented over 50 meetings between members of the executive and legislative branches and members of organizations identified by the U.S. government as Muslim Brotherhood fronts between 1998 and 2009.
There has been little, or no, controversy when members of the federal government, including members of Congress and the White House, meet and consult with Islamist groups that the Justice Department has labeled as Brotherhood entities and unindicted co-conspirators in terrorism financing. But when an opponent of the U.S. Muslim Brotherhood teaches law enforcement, that's a different story.

Islamist political pressure and lawfare works.
You can read Haney’s book for story after story of Islamists using political pressure, provocation and lawsuits to bend U.S. government agencies to their demands, with the above example involving Jamal Badawi being only one. If the U.S. government caves from lawsuits and complaining, then what will happen in the future if these groups continue to become more powerful?

Haney was repeatedly disciplined and investigated for his approach in tackling Islamic extremism, which took on the Islamist ideology as well as the results of that ideology. He was exonerated each time.
If only the government were that hostile to Islamists and their apologists.﻿
Upplagd av hcp kl. 05:00