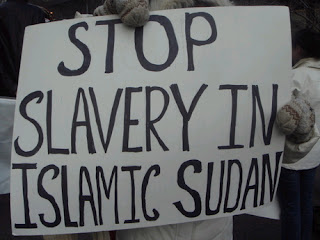 Haifa Diary berättar:
I samband med FN:s skamliga
s k Durban III-konferens hölls
en Durban Watch-konferens i
New York. Den handlade om
hur demokrati, yttrandefrihet
och religionsfrihet ständigt be-
kämpas av islamister och kom-
munister.
**
Ett rörande anförande hölls av
en sydsudanesisk f d slav, Simon
Deng. Han kidnappades som barn
av islamister från norra delen av
landet och lyckades först bli frigiven
i vuxen ålder. Han talade för alla
islamismens offer, alla de som ständigt
nonchaleras av FN:
Look at the situation of the Copts in Egypt,
the Christians in Iraq, and Nigeria, and Iran,
the Hindus and Bahais who suffer from
Islamic oppression. The Sikhs.
We - a rainbow coalition of victims and
targets of Jihadis - all suffer.
We are ignored, we are abandoned.
So that the big lie against the Jews can
go forward.**
In 2005, I visited one of the refugee
camps in South Sudan. I met a twelve
year old girl who told me about her dream.
In a dream she wanted to go to school to
become a doctor. And then, she wanted
to visit Israel. I was shocked. How could
this refugee girl who spent most of her life
in the North know about Israel?
When I asked why she wanted to visit Israel,
she said: “This is our people.”
I was never able to find an answer to my
question.
**
On January 9 of 2011 South Sudan became
an independent state. For South Sudanese,
that means continuation of oppression,
brutalization, demonization, Islamization,
Arabization and enslavement from the North.
In a similar manner, the Arabs continue
denying Jews their right for sovereignty
in their homeland and the Durban III
conference continues denying Israel’s legitimacy.
**
As a friend of Israel, I bring you the news
that my President, the President of the
Republic of South Sudan, Salva Kiir -- publicly
stated that the South Sudan embassy in Israel
will be built--- not in Tel Aviv, but in Jerusalem,
the eternal capital of the Jewish people.
I also want to assure you that my own new
nation, and all of its peoples, will oppose racist
forums like the Durban III.
We will oppose it by simply telling the truth.
Our truth.
My Jewish friends taught me something I now
want to say with you.
AM YISROEL CHAI! The people of Israel lives!
Upplagd av hcp kl. 08:00