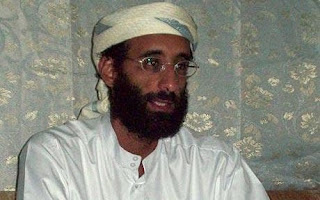 Anwar al-Awlaki: MI5 warns of the al-Qaeda
preacher targeting Britain (Daily Telegraph)
Young British Muslims are being groomed to
carry out terrorist attacks in this country by
Anwar al-Awlaki, a radical al-Qaeda preacher
based in the Middle East, it can be disclosed.
**
The security services fear that a new generation
of British extremists is being radicalised by Awlaki,
who recruited the Detroit plane bomber.
They are concerned that Awlaki’s followers could
unleash a wave of easily planned guerrilla-style
terrorist attacks, similar to the massacre in Mumbai.
Such small-scale attacks could be carried out cheaply
by individuals with little terrorist training and without
the need for the support of a large organisation.
**
The British security services have become so worried
about Awlaki’s rising influence that they have alerted
ministers to their fears.
He is now regarded as one of the world’s most wanted
terrorists.
A briefing paper, seen by The Daily Telegraph, has
been circulated within government, warning that
Awlaki has now “cemented his position as one of the
leading English-speaking jihadi ideologues”.
His growing influence was one of the factors
that led to a raised terrorism alert level in
Britain earlier this year.
Awlaki, who was born in America, but is of Yemeni
descent, is in hiding in Yemen, where he also spent
his teenage years. He has become the foremost
influence on young radical Muslims across the world
through his English language sermons delivered over
the internet.
****
Läs hela artikeln
*****
Läs också
2 Yemenis held by Dutch won't
face U.S. charges
Upplagd av hcp kl. 13:30