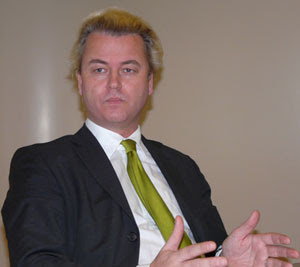 I torsdags stoppades den holländske politikern
Geert Wilders på Heathrow och förbjöds inresa
i Storbritannien. Brittiska regeringen ansåg att
Wilders och hans film Fitna "hotade samhälls-
gemenskapen".....
***
Nu kan jag prsentera det tal Geert Wilders skulle
hållit inför Överhuset i London, om han inte stoppats
p g a ett intensivt lobbyarbete från bl a lord Ahmed,
Al Qaedas man i brittiska parlamentet...
***
Thank you for inviting me.
Thank you Lord Pearson and Lady Cox for showing Fitna,
and for your gracious invitation. While others look away,
you seem to understand the true tradition of your country,
and a flag that still stands for freedom.
**
This is no ordinary place. This is not just one of England’s
tourist attractions. This is a sacred place. This is the
mother of all Parliaments, and I am deeply humbled
to speak before you.
The Houses of Parliament is where Winston Churchill
stood firm, and warned – all throughout the 1930’s –
for the dangers looming. Most of the time he stood alone.
In 1982 President Reagan came to the House of Commons,
where he did a speech very few people liked. Reagan
called upon the West to reject communism and defend
freedom. He introduced a phrase: ‘evil empire’.
Reagan’s speech stands out as a clarion call to preserve
our liberties. I quote: If history teaches anything, it
teaches self-delusion in the face of unpleasant facts is folly.
**
What Reagan meant is that you cannot run away from
history, you cannot escape the dangers of ideologies that
are out to destroy you. Denial is no option.
Communism was indeed left on the ash heap of history,
just as Reagan predicted in his speech in the House of
Commons. He lived to see the Berlin Wall coming down,
just as Churchill witnessed the implosion of national-
socialism.
**
Today, I come before you to warn of another great threat.
It is called Islam. It poses as a religion, but its goals
are very worldly: world domination, holy war, sharia law,
the end of the separation of church and state, the end
of democracy. It is not a religion, it is a political ideology.
It demands you respect, but has no respect for you.
**
There might be moderate Muslims, but there is no
moderate Islam. Islam will never change, because it
is build on two rocks that are forever, two fundamental
beliefs that will never change, and will never go away.
First, there is Quran, Allah’s personal word, uncreated,
forever, with orders that need to be fulfilled regardless
of place or time. And second, there is al-insal al-kamil,
the perfect man, Muhammad the role model, whose
deeds are to be imitated by all Muslims. And since
Muhammad was a warlord and a conqueror we know
what to expect.
**
Islam means submission, so there cannot be any
mistake about it’s goal. That’s a given. The question
is whether the British people, with its glorious past,
is longing for that submission.
We see Islam taking off in the West at an incredible
speed. The United Kingdom has seen a rapid growth
of the number of Muslims. Over the last ten years,
the Muslim population has grown ten times as fast
as the rest of society. This has put an enormous
pressure on society. Thanks to British politicians
who have forgotten about Winston Churchill, the
English now have taken the path of least resistance.
They give up. They give in.
***
Läs hela talet
Upplagd av hcp kl. 12:00