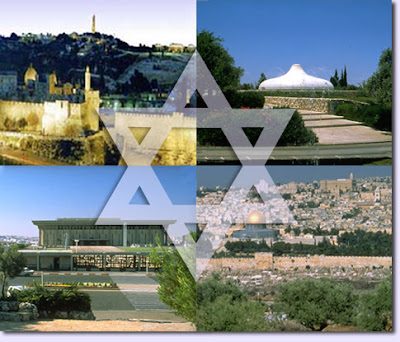 PLO:s "chefsförhandlare" Ahmed Qurei borde
tilldelas priset för årets mest absurda uttalande i
Mellanöstern. Queri hävdar att Templen i Jerusalem
aldrig existerat och att staden är "100 % muslimsk".
Det är ett fantastiskt påstående om en stad vars
judiska rötter fyller många arkeologiska muséer,
medan den muslimska haschischfantasin om
Muhammeds ritt och himlaklättring
först kopplades till Jerusalem
på 1800-talet....
Läs om den historiska
verkligheten i WND-artikeln.
***
The Jewish Temples never existed
and Israel has been working to "invent"
a Jewish historical connection to Jerusalem,
the chief Palestinian negotiator asserted.
**
Qurei said "Israeli occupation authorities are
trying to find a so-called Jewish historical
connection" between Jerusalem and the
Temple Mount, "but all these attempts
will fail. The [Temple Mount] is 100
percent Muslim."
**
The Temple Mount is the holiest site in Judaism.
The First Jewish Temple was built there by
King Solomon in the 10th century B.C.
It was destroyed by the Babylonians in 586
B.C. The Second Temple was rebuilt in 515
B.C. after Jerusalem was freed from Babylonian
captivity. That temple was destroyed by the
Roman Empire in A.D. 70. Each temple stood
for a period of over four centuries.
**
The Jewish Temple was the center of religious
Jewish worship. It housed the Holy of Holies,
which contained the Ark of the Covenant and
was said to be the area upon which God's
shechina or "presence" dwelt.
All Jewish holidays centered on worship at the
Temple. The Jewish Temple served as the
primary location for the offering of sacrifices
and was the main gathering place for the
Jewish people.
**
As late as the 14th century, Islamic scholar
Taqi al-Din Ibn Taymiyya, whose writings
influenced the Wahhabi movement in Arabia,
ruled that sacred Islamic sites are to be found
only in the Arabian Peninsula and that
"in Jerusalem, there is not a place
one calls sacred, and the same holds
true for the tombs of Hebron."
**
It wasn't until the late 19th century – incidentally
when Jews started immigrating to Palestine –
that some Muslim scholars began claiming
Muhammad tied his horse to the Western Wall
and associated Muhammad's purported night
journey with the Temple Mount. A guide to the
Temple Mount by the Supreme Muslim Council
in Jerusalem published in 1925 listed the Mount
as the site of Solomon's Temple.
The Temple Institute acquired a copy of the official
1925 "Guide Book to Al-Haram Al-Sharif," which
states on page 4, "Its identity with the site of
Solomon's Temple is beyond dispute.
This, too, is the spot, according to
universal belief, on which 'David built
there an altar unto the Lord.'"
****
Läs hela artikeln i WorldNetDaily
Upplagd av hcp kl. 19:28