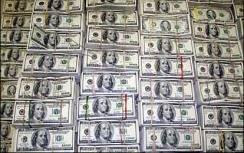 Bildt, Blair & Co har en rejäl julklapp till
terroristmyndigheten i år: 5,6 miljarder $
***
Though PA leader Mahmoud Abbas has
taken no steps to stop terrorism against Israel,
he is being greeted at an international conference
in Paris with admiration - and money.
*
The purpose of the one-day conference is to raise up
to $5.6 billion dollars to help the Palestinian Authority
partially realize its dream of becoming a full-fledged
state in the Land of Israel. Though its long-term goal
is to replace Israel altogether, as indicated by some
of its textbooks and public television shows, at present
it is working on forming a state in Gaza, Judea and
Samaria alone.
*
Before the conference even began, the United States
had pledged $555 million, the European Union $650
million, and Germany and Great Britain together
- $780 million. Japan then stepped in with another
$150 million. Delegates from 70 countries and 20
global organizations are present at the Paris conference.
***
Läs Dag Selanders utmärkta kommentar
***
Though the world views Palestinian Authority
chairman Mahmoud Abbas as a "moderate,"
the terrorist group Al-Agsa Martyrs Brigades
declared this past Thursday that it follows his exclusive
leadership of Mahmoud Abbas - even as it continues
terrorist attacks against Israel.
(INN)
Upplagd av hcp kl. 13:30