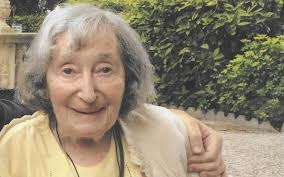 
Det blev ännu ett av de allt vanligare
antisemitiska hatmorden i Frankrike.
Mordet inträffade nästan exakt ett år efter
mordet på den pensionerade läkaren Sarah
Halimi, som misshandlades och slutligen kastades
ut genom fönstret av sina muslimska grannar...
PARIS — An 85-year-old woman who as a child narrowly escaped France’s most notorious wartime roundup of Jews has been murdered in Paris, and the authorities are calling it a hate crime.
The body of the woman, Mireille Knoll, was found on Friday in her apartment in the city’s working-class 11th Arrondissement. She had been stabbed to death, and her body was partly burned after her attackers apparently tried to set fire to the apartment.
The Paris prosecutor’s office said on Monday that Ms. Knoll had been killed because of the “membership, real or supposed, of the victim of a particular religion” — a roundabout way of saying she was killed because she was Jewish.
Ms. Knoll was a child in Paris when, in the summer of 1942, the French police, cooperating with the Germans, rounded up thousands of the city’s Jews, stuffing them into a cycling stadium, the Vélodrome d’Hiver. Virtually all were subsequently murdered at Auschwitz.
Ms. Knoll’s mother, summoned to the stadium like other Parisian Jews, was able to escape at the last minute with her daughter because she had a Brazilian passport, said Meyer Habib, a member of Parliament who has spoken with one of Ms. Knoll’s sons.
Francis Kalifat, the head of the Representative Council of Jewish Institutions of France, said: “This makes one feel something absolutely terrible. She escaped the anti-Semitism of the Nazis, but in the end her destiny followed her because she was killed because of anti-Semitism.”
Interior Minister Gérard Collomb said that “to attack a Jew is to attack France, and the values that are the very basis of the nation.”
A number of anti-Semitic episodes have shaken France, including the murder last year of Sarah Halimi, an elderly Jewish woman, by a man of Malian origin who shouted, “God is great” before throwing her out a window.
The speed with which the authorities recognized the hate-crime nature of Ms. Knoll’s murder is being seen as a reaction to the anger of France’s Jews at the official response to that earlier crime, which prosecutors took months to characterize as anti-Semitic.

Other anti-Semitic crimes that have rattled France include the 2015 attack on a kosher supermarket in Paris by Amedy Coulibaly, a heavily armed "Frenchman", who killed four people, and the 2012 assault on a Jewish school in Toulouse by Mohammed Merah, who killed three children and a teacher after killing three soldiers.
By Monday, two suspects had been arrested in the murder of Ms. Knoll: both young men in their 20s, one of whom was a neighbor. “One of them had known her for a long time,” Mr. Kalifat said. “He had friendly relations with her.”
The Paris prosecutor’s office declined to characterize the origins of the two people; Mr. Kalifat said the principal suspect was of North African origin.
“These are not just thugs,” Mr. Kalifat said. “She was attacked because she was Jewish. This is what characterizes anti-Semitism in our country.”
The suspect “said that Jews have money, and that was the reason he attacked her,” Mr. Kalifat said, whose group is often consulted by the government. “She was absolutely massacred. Eleven knife wounds. That is hatred of the Jews, we see it in the fury of the murderer. This is how we recognize anti-Semitism.”
France’s chief rabbi, Haim Korsia, said in a tweet: “Horrified by the tragic death of Mireille Knoll, who escaped the Shoah, nearly a year to the day after the murder of Sarah Halimi-Attal. The horror of the crime and the violence of the executioners are identical and are a negation of humanity …”
Ms. Knoll was the widow of an Auschwitz survivor, according to press reports.
“The Jews are on the front lines,” said Mr. Habib, the member of Parliament. “They start with the Jews, and afterward they kill other Frenchmen,” he said. “Jews are being killed because they are Jews. That is very serious.”