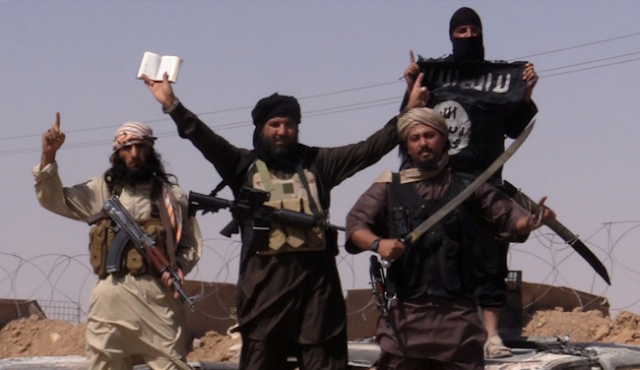 A terrifying list of 173 ISIS assassins prepared to carry out attacks in Europe has been found in Iraq.
The list was found in a terrorist hideout in the shattered ruins of Mosul and includes names, photos and the country of origin of scores of fanatics.
More than 130 of the fighters are from Iraq, but it also includes Tunisians, Moroccans and Jordanians as well as jihadists from Tajikistan and Saudi Arabia, according to German newspaper Die Welt.
Six of the terrorists are Europeans - from Belgium, the Netherlands, France and Germany.

Die Welt said Iraqi special forces apparently discovered the dossier in an ISIS hideout.
American intelligence services have evaluated the papers and sent them to global police authority Interpol.
In May, the paper writes, the list was distributed among all European security agencies including Britain's.
The fear is of a spectacular outrage being planned somewhere in the West as the group's self-proclaimed caliphate dies in the Middle East.
The lone German on the list is Sami J., 27, from Solingen, formerly a leading member of the Islamist group Fillatu Ibrahim.
His current battle name is 'Abu Assid al-Almani' - the German. He is said to have left his homeland in 2012, travelled to Egypt, then Libya and later via Turkey to Syria to join ISIS.

Die Welt says it has seen the list, adding: 'Each photo on the list is marked with a name and a date of birth, with a often martial-sounding battlename and information about the country of origin.
'Some smile joyfully, others seem shy, many serious and expressive. A few of the shots look like passport photos.'
And it notes the speciality of the holy warriors. Next to the name Sami M. It says: 'Suicide bomber'.
Europe lost some 6,000 men and women to the ranks of ISIS, nearly 1,000 of them from Germany.
No one knows how many hard-hardened fanatics still remain in the embattled areas