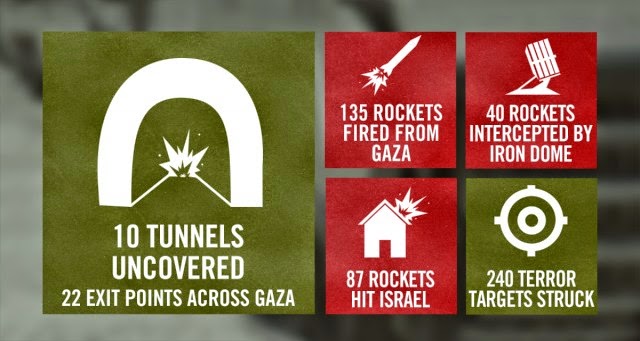 Since the beginning of Operation Protective Edge, more than 1,637 rockets
were fired at Israel. Of them 1,228 of the rockets hit Israel and an additional 340 rockets were intercepted by Iron Dome. Furthermore, seven IDF soldiers have been injured and approximately 53,200 reserve soldiers have been recruited.
Since the beginning of the ground phase of the operation, more than 135 rockets were launched at Israel, of them approximately 87 of the rockets hit Israel.
One of them hit a kindergarten in Gan Yavne and another caused damage to a home in the Sha’ar HaNegev regional council. An additional 40 rockets were intercepted by the Iron Dome.