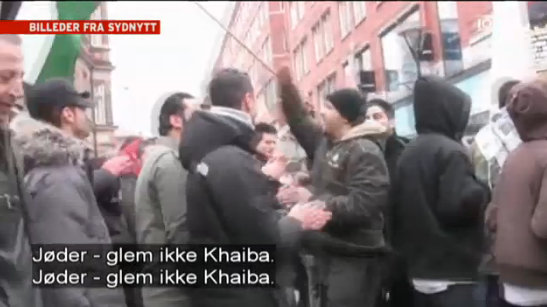 The city of Malmö will soon be Judenrein.
A step on the road to a judenrein Europe.

In the Swedish tourist guides, the city of Malmö
is presented as "a paradise for ecologists", full
of bicycles, bike paths and green areas.
In addition, this third-largest and most prosperous
Swedish city is a symbol of the "modern and
cosmopolitan" soul of the Scandinavian country
of equal opportunities, literacy, integration and
welfare state.
In Swedish it is called "Folkhemmet", the home
of all the people. Malmö is the symbol of this multi-
cultural utopia on which for decades Sweden has
built its model of integration (a country that called
herself a "moral superpower").
The illusion was that a prosperous society, indifferent
to religion, ideologically welcoming and tolerant,
would heal any trauma of integration.
In the industrial area that at one time housed the
shipyards of Kockums, now stands the symbol of
the city, the famous skyscraper modelled on a
human torso, a creation of the Spanish architect
Santiago Calatrava.
The dozens of ethnic groups in Malmö are united
in one organic body. Yet according to the newspaper
Dagens Nyheter, while the old industrial city becomes
"a international melting pot full of optimism," the
Jewish families are leaving it.
**
Malmö is the city that serves as the symbol of the
Swedish Jewish community. The main synagogue
of the "Judiska Församlingen i Malmö", founded in
1903, is one of the few temples preserved from
that era in Europe. Most similar synagogues in the
continent were in fact destroyed under Nazism.
The city of Malmö will soon be Judenrein.
Free of Jews. As the Dagens Nyheter notes, a
growing number of Jewish families are leaving
due to Islamist anti-Semitic attacks.
Malmö, capital of the prosperous province of Scania,
had a 2,000-strong Jewish community in the 1970s.
However, only 500 remain there today, explains the
newspaper. “The majority have moved to Stockholm
or abroad.”
Sweden, which was famously neutral during World
War II and served as a refuge for Scandinavian Jews,
is a prototype of Europe's new anti-Semitism.
Jewish cemeteries were desecrated and the Jewish
centers were bombed, worshippers were abused on
their way home from the synagogue, and "Jude S---
destroys Hollviken" and "You shall be gassed" were
mockingly chanted in the streets.
Indeed, it is part of a tragic, but unavoidable,
process: the New Europe will be a Jews-free
continent. It begins with Malmö and it ends
with Rome.
**
"The ultimate goal is the same as that of Reinhard
Heydrich's "Final Solution": a Jew-free continent.
"It is not just the Swedish Muslims who physically
persecute and intimidate the Jews (in Malmö the
most common name for newborn boys is now
Mohammed).
Ilmar Reepalu, the Left-wing mayor of Malmö who
had been in power for 15 years till last January,
choose to not protect the Jews but to express
sympathy with the terrorists.
The Swedish governments have also forsaken
the Jewish people.
In Malmö you see Jews running after leaving the
synagogue. Yet the Swedish court system did not
convict anyone of hate crimes in Malmö in 2010
and 2011, despite registering 480 complaints.
In Malmö, the Jews who arrived through ferries and
fishing boats, after being rescued from the Nazi
concentration camps, or who fled to Sweden from
communist Poland in the 1960s, are leaving their
former sanctuary. In Poland, these were the "f---ing
Jews". In Malmö they became the "f---ing Poles".
Now they are the "f---ing Jews" once again.
Europe's cycle of anti-Semitism is closing in again.
As it is closing in in Brussels, from where many Jews
are leaving for Tel Aviv due to anti-Semitism.
Immigration to Israel was slightly down worldwide in
2012, but figures from Western Europe were up.
CNN recently ran a special "The exodus of Jews from
France".
**
Malmö and Brussels are not Chelmno.
There are not gas chambers in the Swedish or
Belgian city.
But the ultimate goal is the same as that of
Reinhard Heydrich's "Final Solution": a Jew-
free continent.
Last year journalist Espen Eidum detailed in a book
how Stockholm aided the Nazis during WW2 as their
neighbours fought and lost a decisive battle against
the German invaders. Particularly, Sweden aided
Heydrich's troops through the use of the Railways to
transfer Jews to death camps.
Are we witnessing the same seeds of that betrayal?
The Israeli government should help Europe's Jews to
resettle in Israel as it did with the Mizrachi Jews after
1948.
If you look at Sweden as a multicultural kaleidoscope,
turning the three mirrors in the tube, what future will
the Jews of Europe have? None.
My continent has no room for living Jews.
Upplagd av hcp kl. 20:00