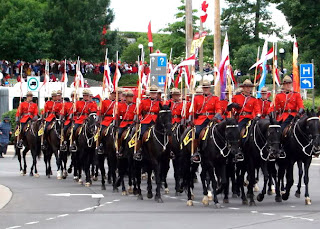 Kanada har med omedelbar verkan
avbrutet de diplomatiska förbindelserna
med mullornas Iran.
Alla iranska diplomater utvisas från Kanada
och den kanadensiska ambassaden i Tehran
stängs.
Åtgärden bör ses som ett föredöme för
hela Västvärlden.
**
Arutz Sheva rapporterar:
Canada announced on Friday that it is closing
its embassy in Iran and would be expelling
Iranian diplomats from Canada.
Canadian Foreign Affairs Minister John Baird
said in a statement, “Canada has closed its
embassy in Iran, effective immediately, and
declared personae non gratae all remaining
Iranian diplomats in Canada.
“Canada’s position on the regime in Iran is
well known. Canada views the Government
of Iran as the most significant threat to
global peace and security in the world today,”
said Baird.
**
“The Iranian regime is providing increasing
military assistance to the Assad regime; it
refuses to comply with UN resolutions per-
taining to its nuclear program; it routinely
threatens the existence of Israel and en-
gages in racist anti-Semitic rhetoric and
incitement to genocide; it is among the
world’s worst violators of human rights;
and it shelters and materially supports
terrorist groups, requiring the
Government of Canada to formally list
Iran as a state sponsor of terrorism
under the Justice for Victims of
Terrorism Act.
**
“Moreover, the Iranian regime has shown
blatant disregard for the Vienna Convention
and its guarantee of protection for diplomatic
personnel,” said Baird’s statement.
“Under the circumstances, Canada can no l
onger maintain a diplomatic presence in Iran.
Our diplomats serve Canada as civilians, and
their safety is our number one priority.
“Diplomatic relations between Canada and
Iran have been suspended. All Canadian
diplomatic staff have left Iran, and Iranian
diplomats in Ottawa have been instructed
to leave within five days.
“Canada has updated its Travel Reports and
Warnings to advise Canadians to avoid all
travel to Iran. Canadians who have Iranian
nationality are warned in particular that the
Iranian regime does not recognize the
principle of dual nationality.
By doing so, Iran makes it virtually impossible
for Government of Canada officials to provide
consular assistance to Iranian-Canadians in
difficulty.”
**
Canada’s announcement was welcomed by
Prime Minister Binyamin Netanyahu, whose
office said in a statement on Friday,
“A week after the show of anti-Semitism
and hatred in Tehran, the Canadian govern-
ment has adopted a highly moral step.
The determination shown by Canada is very
important so the Iranians realize they cannot
continue the race for nuclear weapons.
“This practical step should be an example to
the international community of morality and
responsibility,” said the statement.
“It is important that the international community
join this pressure by presenting clear red lines
for Iran.”
***
Hade utrikesminister Bildt lyssnat på någon
annan än sitt självgoda ego, borde svenska
folket uppmanat honom:
FÖLJ KANADAS FÖREDÖME !
Upplagd av hcp kl. 08:00